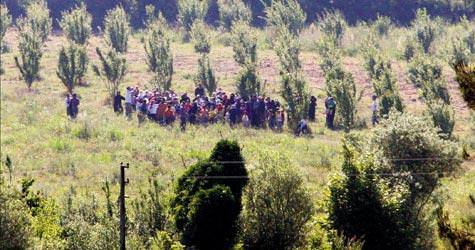 Syrians fled a restive town toward the Turkish border, fearing bloodshed as troops with tanks approached, under orders to hit back after the government accused armed bands there of killing scores of its security men.

Though accounts of days of killing in Jisr al-Shughour ranged from an official version of gunmen ambushing troops to residents' reports of an army mutiny, it triggered international alarm that violence may enter a new and bloodier phase after three months of popular unrest that has left over 1,000 dead.

France and Britain, allies in the war against Libyan leader Muammar Gaddafi, took a lead in pushing U.N. moves against Syrian President Bashar al-Assad. But Russia, citing NATO's inconclusive bombing of Tripoli, said it would veto intervention against Syria in the United Nations Security Council.

French Foreign Minister Alain Juppe, at U.N. headquarters in New York, said it was "a question of days, maybe hours" before the Council voted on a resolution condemning Syria. A draft circulated last month does not propose military intervention.

At Jisr al-Shughour, home to tens of thousands of people, residents said they were taking cover and bracing for attacks.

"The army is taking up position around Jisr al-Shughour," one anti-government activist told Reuters by telephone, saying residents have seen troops approaching the northeastern town from Aleppo, Syria's second city, and from Latakia on the coast.

"Most people have left the town because they are scared," he said, asking not to be named for his own safety. "They know the deaths will be high. People have gone to nearby villages close to the Turkish border. The doctors and nurses have also left."

On Monday, Information Minister Adnan Mahmoud said army units would carry out their "national duty to restore security."
The government has expelled independent journalists, making it hard to determine clearly what is happening in the country.

Despite enthusiasm for pro-democracy movements that have unseated dictators in Tunisia and Egypt, few Western leaders -- let alone their autocratic Arab partners -- have shown a will to intervene in Syria, an Iranian ally whose volatile mix of ethnic and religious groups sits astride a web of regional conflicts.

Assad's family and supporters from the minority Alawite sect have dominated Syria since his late father seized power 41 years ago. He has responded with promises of reform, and a crackdown on protesters in towns across the country. His officials accuse radical Islamists of fomenting a violent, armed revolt.

Neighboring countries, including Israel and Turkey, worry that a collapse into chaos could set off sectarian conflict and the emergence of violent, radical Islamists, as happened in Neighboring Iraq after the U.S. invasion of 2003.

But Western powers kept up pressure. British Foreign Secretary William Hague, in some of London's strongest language yet against the 45-year-old leader, told parliament: "President Assad is losing legitimacy and should reform or step aside." He said European governments were looking at further sanctions.

"We are working to persuade other countries that the Security Council has a responsibility to speak out," Hague added. Russia appears opposed to a general condemnation of Assad, let alone authorizing military action against him.

President Barack Obama, who last month urged Assad to lead a transition to democracy or "get out of the way," did not mention Syria in remarks at a news briefing on Tuesday.

But in Brussels, Russia's envoy to the European Union, Vladimir Chizhov, said: "The prospect of a U.N. Security Council resolution that's along the same lines as Resolution 1973 on Libya will not be supported by my country ... The use of force, as Libya shows, does not provide answers."
Veto-holding Russia abstained on the Libya vote, allowing NATO to begin a bombing campaign that Western powers say saved civilians in rebel-held Benghazi from an onslaught by Gaddafi's forces, but which has failed to dislodge the Libyan leader.

A report that Syria's ambassador to Paris had quit prompted speculation of rifts in the Syrian elite. France 24 television aired comments it said was the envoy resigning. But Al-Arabiya later broadcast comments in Arabic that it said were from the same diplomat in which she denied making such a statement.

It remained unclear whether there had been some hoax or a change of heart. The ambassador could not be reached to comment.