Ankara on alert for next three critical months along the border 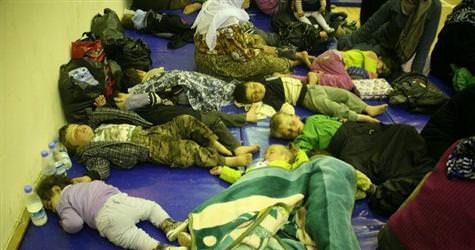 Turkey has designated the next three months, namely July, August and September as critical under the stipulation that the environment of conflict in Syria persists and the number of refugees increase. The state has prepared a three-part plan and Prime Minister Erdoğan assures the borders will not close.

Turkey has increased measures to handle an influx of refugees from Syria as the country's turmoil persists. Designated as a critical three month period, safety, social and economic plans are being made to handle a possible increasing number of refugees from Syria into Turkey during the summer months of July, August and September.
According to the plan penned by the Prime Ministry, General Staff, Foreign Affairs and Interior Affairs Ministries and the Ministry of Health, Syrian refugees will be greeted and processed by the Prime Ministry Department of Natural Disasters. The developments in Syria will be brought to the National Security Council agenda following the upcoming parliamentary elections.

ONE MILLION REFUGEES
Meanwhile, the Gendarmerie General Command has reinforced troops along the Hatay border with the increase of tension in the Syrian conflict. Also on the agenda is for Turkish Armed Forces troops to set up a secure region across the border for refugees. A 30 million TL subvention has been set aside for a possible wave of refugees. The Hatay, Kilis, Antep, Urfa and Mardin governorships will benefit from the subsidy. Allegations that the Syrian opposition has received weapons through Turkey have been discredited. Ankara is expecting between 500,000 and one million refugees to come in from Syria. However there are drawbacks due to the potential for PKK sympathizers to infiltrate amongst the refugees coming into Turkey. Plans are for approximately 800 soldiers to form a battalion that will designate a buffer zone to establish security for Turkey and its influx of refugees. Since May 1st, in addition to the normal border crossing, 87 Syrian citizens came into the country illegally.
The majority of refugees will be settled into four camps set up in Hatay and Kilis. Due to schools being on break, boarding schools may be also used to accommodate refugees. The government plan is also taking in to account the Ramadan holiday which begins on August 1st.