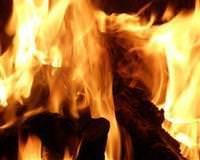 A fire broke out early on Thursday morning at the hotel housing foreign journalists in the Libyan capital Tripoli, a Reuters witness said.

About 100 people, most of them journalists, were evacuated to the parking lot just before 6 a.m. after the blaze was discovered.

There were no reports of injuries and the fire was put out about an hour later.

Government spokesman Moussa Ibrahim, speaking outside the Rixos Hotel, said the fire had not been caused by any military action, including NATO bombings of the city.

"We have to have an investigation but according to the hotel staff it's an electricity fire in the electricity room of the hotel," Ibrahim said.

The blaze sent dark clouds of smoke into the morning sky. Hotel staff were on top of the building spraying the flames with a hose until a fire truck arrived.