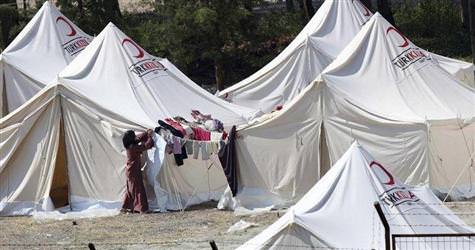 Over a thousand Syrians have fled across the border into Turkey to escape violence in the last 24 hours and taken refuge in a tent camp there, a U.N. High Commissioner for Refugees spokesman said on Thursday.

Syrian troops with tanks have deployed near the town of Jisr al-Shughour, prompting many of its 50,000 people to flee. The government has accused armed bands of killing scores of its security men in the town and has vowed to send in the army.

On Wednesday, Prime Minister Tayyip Erdoğan said Turkey was opening its gates to people fleeing the clashes between pro-democracy demonstrators and security forces in Syria, while urging President Bashar al-Assad's government to act with more restraint.

"We are very pleased with Turkey's attitude on this matter," UNHCR spokesman in Turkey Metin Corabatir told Reuters.

"Turkey has stated its determination to keep its gates open to Syrians at the highest level."

He said that based on figures provided by the Turkish Red Crescent and foreign ministry 1,577 Syrians were living in the Yayladağı camp, following the latest influx, with 1,050 arriving in the last 24 hours.
The UNHCR does not have its own representatives at Yayladağı, the only camp which is so far available.

At Yayladağı, women hung up washing, children played between the tents and men wandered around the camp, located at the foot of mountains in a valley shaded with trees. A few Turkish police guarded the camp, preventing journalists entering.

Authorities in Turkey's southern province of Hatay have issued orders to police to bar media access to Syrians who have crossed the border, whether in the tent camp or hospital.

The UNHCR official said there were some expectations of another influx of refugees on Friday, and the Turkish Red Crescent was looking for another location to establish a camp.

"Turkey says it's ready for a number of probable developments, and we believe them," Corabatir said.

"The most important issue here is to keep the gates open, to provide shelter and safety for people whose lives are in danger."

Civil unrest broke out in southern Syria in March, but it was only after protests spread to northern areas that the first few hundred refugees fled to Turkey in late April.

More than 1,000 people have been killed during popular unrest in Syria over the past three months, according to human rights groups.