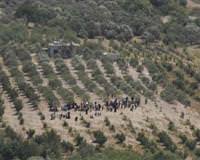 Turkey threw open its borders to anxious Syrian refugees on Wednesday and urged their government to curb violence against civilians after thousands abandoned a town near the Turkish frontier in fear of a military assault.

With Western public opinion startled by the bloodshed that has met Syrians' efforts to emulate other Arabs in casting off autocratic rule, Britain and France asked the U.N. Security Council to condemn President Bashar al-Assad -- though there seemed to be no appetite for Libya-style military intervention.

Assad's government has accused armed bands of killing scores of its security men in the northwestern town of Jisr al-Shughour and vowed to send in the army to carry out their "national duty to restore security" there. Troops with tanks have deployed near the town, prompting many of its 50,000 people to flee.

"We are monitoring developments in Syria with concern," said Turkish Prime Minister Tayyip Erdogan, who has long sought warm relations with Assad. "Syria should change its attitude toward civilians and should take its attitude to a more tolerant level.

"It is out of the question for Turkey to close its doors to refugees coming from Syria."

The troop movements, after the government reported the loss of over 120 men in what anti-Assad activists said was fighting among soldiers, has raised fears violence could move to a new level. Rights groups say over 1,100 civilians have been killed since March in protests against 41 years of Assad family rule.

In Jisr al-Shughour, people have long memories of a mass killing in 1980, under Assad's father. That proved a precursor to the suppression of an armed Islamist revolt in the city of Hama, in which many thousands were killed in 1982.

A total of 448 people crossed into Turkey on Wednesday and were being housed in tents, state-run Anatolian news agency reported. Some 100 tents were set up in a camp near the border where 666 people are now receiving food and medical attention.

Some wounded were taken to hospitals. Syrian residents have said most who fled the town remained in villages inside Syria.

Reuters journalists in Turkey saw tents on the Syrian side of the border. Turkish villagers said they saw Turkish troops and ambulances pick up Syrians who crossed earlier in the day.

Adding the new arrivals to earlier figures from the Turkish Foreign Ministry, some 750 Syrians have entered since March.

A 16-year-old boy who fled across the border said soldiers entered Jisr al-Shughour from Friday.

"They shut the bakeries and cut the water to the town," said the boy who declined to give his name. "Soldiers attacked houses and men, women and children regardless," he said.

France and Britain, allies in the war against Libyan leader Muammar Gaddafi, handed the U.N. Security Council a draft resolution on condemning Syria's crackdown on protesters, despite the risk of a Russian veto.

"And if anyone votes against that resolution or tries to veto it, that should be on their conscience," British Prime Minister David Cameron said, in a pointed reference to efforts to secure Russian backing for it.

The draft resolution condemns the repression and demands humanitarian access, Cameron said in London. But it was unclear how Russia, which holds a veto, would vote. Citing NATO's inconclusive bombing of Tripoli, Moscow says it will not back intervention against Syria in the Security Council.

Western diplomats said they did not expect a vote on Wednesday but hoped it might come before the end of the week.

The original draft resolution, which diplomats say has been amended only slightly since last month, urges countries not to supply weapons to Damascus but would not provide for an actual arms embargo or other specific punitive measures.

One diplomat said the amendments attempted to make it look less like a prelude to further action like the military action that NATO has conducted in Libya, which Moscow has opposed.

At the same time, a senior European diplomat told reporters in Washington that European Union nations are preparing a third round of sanctions against Syria that target Syrian companies.

At Jisr al-Shughour, residents have said since Tuesday that they were taking cover and bracing for attacks.

Rami Abdulrahman of the Syrian Observatory for Human Rights said a convoy of tank-carriers with 60 tanks and about a dozen trucks carrying troops were seen moving on the main Aleppo highway in the direction of Jisr al-Shughour.

"When they (troops) passed the town of Saraqeb, protesters threw stones, prompting troops to open fire, killing one person," Abdulrahman told Reuters. Earlier he said troops had deployed in neighboring villages, including Ariha to the east and on the main highway to the city of Latakia to the southwest. Residents said about 40 tanks and armored vehicles were about 7 km (4 miles) from Jisr al-Shughour.

Assad has expelled Reuters correspondents and barred most independent media, making it impossible to verify such accounts.

A witness in Damascus told Reuters he saw 40 tanks and armored vehicles and trucks able to carry some 400 troops heading north on Tuesday toward the cities Homs and Hama.

Despite enthusiasm for pro-democracy movements that have unseated presidents in Tunisia and Egypt, few Western leaders -- let alone their autocratic Arab partners -- have shown a will to intervene in Syria, an Iranian ally whose volatile mix of ethnic and religious groups sits astride a web of regional conflicts.

"Assad is finished, but we have to see how this regime will crumble," said Burhan Ghalyoun, a Syrian opposition and academic at the Sorbonne in Paris.

Assad's family and supporters from the minority Alawite sect have dominated Syria since his late father seized power 41 years ago. He has responded with promises of reform, and a crackdown on protesters in towns across the country.

Jisr al-Shughour is home mainly to people from the Sunni Muslim majority. The security forces are mostly run by Alawites.

Neighbouring countries, including Israel and Turkey, worry a collapse into chaos in Syria could set off sectarian conflict.

Activists have reported incidents of soldiers who have defected from the army because they could no longer bear to open fire on protesters, but those accounts have been hard to verify.

In the latest of several similar videos distributed over the Internet by anti-government activists, a man presented as a soldier from the province around Jisr al-Shughour said the protests were peaceful and called on fellow soldiers to quit.