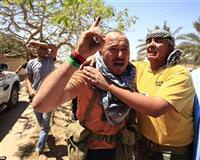 A Reuters journalist also reported a loud explosion in Tripoli on Friday just after midnight, a common time for NATO strikes on the capital.

The 22-nation Libya contact group that includes The United States, France and Britain as well as Arab states such as Qatar and the UAE, met in Abu Dhabi to press the rebels to give a detailed plan on how they would run the country if Gaddafi stood down or was toppled.

Secretary of State Hillary Clinton said talks were under way with people close to Gaddafi that had raised the "potential" for a transition of power without giving details.

But there was frustration among the rebel leadership despite securing new aid commitments from France, Italy and Turkey.

"Our people are dying ... So my message to our friends is that I hope they walk the walk," rebel oil and finance minister Ali Tarhouni said, adding he hoped oil production of 100,000 barrels a day would restart soon.

Libyan state television reported on Thursday that the NATO-led military alliance had hit civilian and military targets in the town of Zuwarah, 120 km west of the capital Tripoli after earlier resuming strikes in the capital following the heaviest day of bombings since March.

Rebels said pro-Gaddafi forces shelled their positions in the Western Mountains region on Thursday night, adding NATO had not been doing enough to confront the renewed attacks.

"They (Gaddafi forces) are shelling Zintan (160 kilometers southwest of Tripoli) with Grad missiles," said rebel spokesman Abdulrahman late on Thursday. "There have been no NATO air strikes for a week."

Another rebel spokesman Juma Ibrahim in Zintan said the towns of Yafran and Nalut had also been shelled and that Gaddafi's forces were massing near the Tunisian border to try to retake the Wazin crossing from the rebels.

Rebels in Misrata said shelling had also resumed after a "major advance" from Gaddafi loyalists on Wednesday. A NATO official earlier played down the reports of government advances.

"The situation is a stalemate -- both sides are adopting hit-and-run tactics," rebel spokesman Abdelsalam said from Misrata. "NATO has to change something. Their goal is unclear."

Another rebel spokesman said 22 people had been killed in fighting with pro-Gaddafi forces over the last week and asked why attack helicopters had not been deployed to support them.

Rear Admiral Philippe Coindreau, who heads French operations over Libya, said that the strikes against Gaddafi's forces were increasingly wearing them down and that the helicopters would "accelerate" the attrition of his forces.

The alliance says the bombing aims to protect civilians from the Libyan military, which crushed popular protests in February.

The Libyan leader says the rebels are Islamist militants and NATO is attempting to grab Libya's oil.

At the United Nations, the prosecutor of the International Criminal Court (ICC) said its investigators had found evidence linking Gaddafi to a policy of raping opponents.

A possible war crimes prosecution could be an incentive for Gaddafi to cling to power, but Senegalese President Abdoulaye Wade, offered to help ease his former African Union ally's exit from power and appealed to him to step down.

"It is in your own interest and the interest of all the Libyan people that you leave power in Libya and never dream of coming back to power," said Wade. He was the first foreign leader to visit the rebels' eastern stronghold of Benghazi.

Gaddafi troops and the rebels have been deadlocked for weeks between the eastern towns of Ajdabiyah and the Gaddafi-held oil town of Brega. Rebels also control the western city of Misrata and the range of Western Mountains near the border with Tunisia.