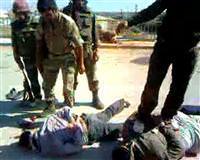 The Syrian army began a military operation in a restive town near the Turkish border, state television said on Friday, as the country braced for more violent protests against the rule of President Bashar al-Assad.

The Syrian government said earlier that "armed gangs" killed more than 120 security personnel in Jisr al-Shughour, a town of 50,000, earlier this week.
"Our correspondent in Jisr al-Shughour told us now that in response to people's calls, units from the Syrian Arabic Army started its duties in Jisr al-Shughour ... to arrest armed members," the television said.
Rami Abdulrahman of the Syrian Observatory for Human Rights said residents in the northwestern town told him the army was still advancing towards the town. "They can hear gunfire and so far we do not have any casualty reports," he told Reuters.
Thousands of Syrians in the region fled into Turkey on Thursday fearing the military assault. At least 15,000 troops had deployed near Jisr al-Shughour, which residents said had largely emptied of people.
The latest reports of a government crackdown intensified international concerns over Syria's handling of pro-democracy protests, inspired by uprisings across the Arab world.
Britain, France, Germany and Portugal have asked the U.N Security Council to condemn Assad, although veto-wielding Russia has said it would oppose such a move.
World powers have shown no appetite for any Libya-style military intervention in Syria, which has so far shrugged off sanctions and verbal reprimands from abroad.

Residents said on Thursday about 40 tanks and troop carriers had deployed about 7 km (4 miles) from Jisr al-Shughour. Activists and residents say the violence began after a mutiny among security forces who refused to fire at protesters.
Turkey's Red Crescent said it was setting up a second camp near the border to shelter people still crossing from Syria to escape the military build-up.
Turkish Foreign Minister Ahmet Davutoglu said on Thursday 2,400 people had already entered Turkey
"Jisr al-Shughour is practically empty. People were not going to sit and be slaughtered like lambs," said one refugee who crossed on Wednesday and who gave his name as Mohammad.


Syria has barred most independent media from the country, making it difficult to verify accounts of the violence.
Assad, 45, has promised reforms even while cracking down on unrest buffeting the country that has become the gravest threat to his 11-year authoritarian rule. Friday prayers have been a focus of protests throughout the revolt.
The governing board of the U.N. nuclear watchdog reported Syria to the Security Council on Thursday for covert atomic work, a U.S.-led move coinciding with Western condemnations of Damascus' crackdown on opposition protests.
Russia and China voted against the proposal at the International Atomic Energy Agency, underscoring big-power divisions that may rule out any follow-up punitive measures for the time being.