Germany pins down E.coli: "It's the bean sprouts" 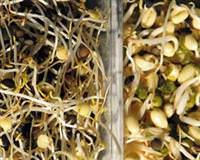 Germany said on Friday that deadly E.coli bacteria that have killed 31 people and hit farmers across Europe almost certainly came from contaminated bean sprouts grown at an organic farm in northern Germany.

"It's the bean sprouts," said Reinhard Burger, head of the German center for disease control, confirming that the salad vegetable was the common denominator among the thousands who had fallen sick.

Government scientists said traces of the deadly strain were detected in a packet of bean sprouts from the farm found in a family's rubbish bin in the western state of North Rhine-Westphalia. Two of the family fell ill after eating them.

Their announcement came just hours after Burger's team in Berlin said it had identified bean sprouts or similar shoots as the most likely source of the outbreak, citing a study of patients and the food they ate.

The German government had come under fire at home and around Europe for failing to pin down the cause of the outbreak that has stricken some 3,000 people in 12 countries. All cases have been traced back to near Hamburg in northern Germany.

About a quarter of patients in the month-long outbreak have developed a severe complication called hemolytic uraemic syndrome (HUS) affecting the blood, kidneys and nervous system.

The state consumer protection agency in North Rhine-Westphalia said it had found the first direct E.coli link to the organic farm in the neighboring state of Lower Saxony, near the small town of Bienenbuettel.

"According to our knowledge to date, the bean sprouts originated from the farm," the state agency said.

Burger, the head of the Robert Koch Institute, earlier told a news conference the evidence clearly pointed toward the farm in Lower Saxony.

"All the registered cases in this study had consumed these bean sprouts," said Burger. "The test method made it possible in an epidemiological way to isolate the source of the outbreak, with a high probability, to the consumption of bean sprouts."

"People who consumed sprouts were nine times more likely to have bloody diarrhea than those who did not," he said.

Bean sprouts, a common salad ingredient grown from a variety of seeds, are popular in Germany, where they are served in salads and often in sandwiches. The institute said Burger's comments covered a wide range of shoots.

The investigation has focused on the organic farm for days, and the agriculture minister for Lower Saxony said separately on Friday he was convinced this was where the outbreak had begun.

Gert Lindemann, the minister, had earlier said that alfalfa, mung bean, radish and arugula sprouts from the farm near Bienenbuettel might all be linked to the outbreak.

"The chain of evidence pointing to bean sprouts is flawless. For us, the source of the outbreak is definitely the farm in Bienenbuettel," Lindemann said on Friday. The farm has been shut down and is no longer delivering vegetables to market.

Authorities said on Friday it was now safe to eat tomatoes, cucumbers, and leafy salads, food originally suspected as the source, but bean sprouts should be avoided while studies continued.

Germany had also came under fire for hastily blaming the outbreak on Spanish cucumbers, comments it later withdrew, and a failure to produce conclusive evidence of the source.

The European Union raised its compensation offer for farmers hit by plummeting sales to 210 million euros ($302 million) from 150 million, made after Germany first blamed cucumbers from Spain and other salad vegetables.

Organic producers had attracted suspicion because they use manure rather than chemical fertilizer, putting crops more at risk of contamination. The economic damage to Europe's farming industry could reach half a billion euros.

The neighboring Netherlands welcomed the German findings. "This is very good news," said Murco Mijnlieff, a spokesman for the Dutch Ministry of Economic Affairs, Agriculture and Innovation on Friday after the cucumber warning was lifted. "It is the first step to consumer confidence in those products."

The Netherlands exports around 70 percent of its cucumber output to Germany. The losses for the Dutch alone are estimated at 70 million euros a week.

In Germany the death toll from the E.coli epidemic rose by one on Friday after authorities confirmed a woman who died on June 3 was a victim of the bacteria.

German authorities said the outbreak was still a threat, despite signs of slowing, and warned the death toll may rise.

"I cannot give an all-clear. New infections are still to be expected but the number new infections is clearly falling," Health Minister Daniel Bahr said.