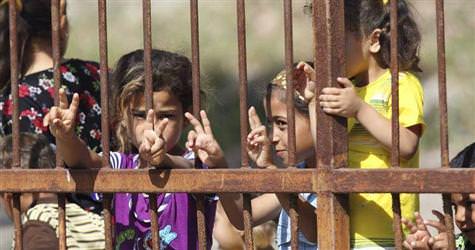 The use of the aircraft came on a day of nationwide rallies against President Bashar al-Assad, as unrest showed no sign of abating despite the harsh crackdown by his authoritarian state.

The helicopters opened fire in a northwestern town after security forces on the ground killed five protesters, said the Syrian Observatory for Human Rights.

"At least five helicopters flew over Maarat al-Numaan and began firing their machineguns to disperse the tens of thousands who marched in the protest," one witness said by telephone.

"People hid in fields, under bridges and in their houses, but the firing continued on the mostly empty streets for hours," said the witness, who gave his name as Nawaf.

Syria's state television, in contrast, blamed violence in the area on anti-government groups. It made no mention of attack helicopters but said an ambulance helicopter had come under fire over Maarat from "terrorist armed groups," injuring crew.

Britain, France, Germany and Portugal have asked the U.N. Security Council to condemn Assad, though veto-wielding Russia has said it would oppose such a move.

Moualem's letter asked for U.N. help to combat "extremism and terrorism." Damascus wanted dialogue with the opposition, the letter said.

Syrian authorities have banned most foreign correspondents from the country and have repeatedly tried to portray anti-government protesters as armed and violent.

"There were peaceful protests today (in Maarat) calling for freedom and for the downfall of the regime," one demonstrator said by phone. "The security forces let us protest, but when they saw the size of the demonstration grow, they opened fire to disperse us."

"During the protest, two officers and three soldiers refused to open fire so we carried them on our shoulders. After that, we were surprised to see helicopters firing on us."

The northwest border area, like other protest hotspots, is prone to tension between majority Sunni Muslims and Assad's Alawite sect, which dominates the Syrian power elite. The violence may reflect splits within the security forces, whose commanders are mainly Alawite and conscripts Sunni.

Activists said Syrian forces had shot dead at least 33 at rallies across the country after Friday prayers.

A U.N. spokesman said Secretary-General Ban Ki-moon had been trying to call Assad all week but was told that the president was "not available."

Thousands of civilians have fled from the northwestern border area into Turkey, fearing security forces' revenge for incidents in which 120 troops were reported killed this week.

Local people said at least 15,000 troops along with some 40 tanks and troop carriers had deployed near Jisr al-Shughour.

"Jisr al-Shughour is practically empty. People were not going to sit and be slaughtered like lambs," said one refugee who crossed the border into Turkey.

A 40-year-old from Jisr al-Shughour, with a bullet still in his thigh, also described mutiny in Syrian ranks.

"Some of the security forces defected and there were some in the army who refused the orders of their superiors," he said. "They were firing on each other."

Human rights activists aired a YouTube video described as from a Lieutenant Colonel Hussein Armoush, saying he had defected with soldiers to "join the ranks of the masses demanding freedom and democracy."

A Turkish newspaper said Ankara was looking into creating a buffer zone along the border as a contingency if hundreds of thousands of Syrians are driven out.

The International Committee of the Red Cross urged Syria to allow its aid workers wider access to the civilian population, including the many believed wounded or detained.

Rights groups say over 1,100 civilians have been killed since March in the revolt to demand more political freedoms and an end to corruption and poverty.