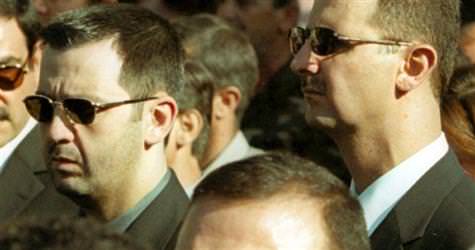 Syrian State Leader Bashar Assad’s brother Maher Assad is personally directing the massacre as chief commander of the Republican Guard as well as of the Fourth Division, known to be the most combative of Syria’s troops.

FIRE ON THE PUBLIC BY HIS ORDER
All of the monstrosities transpiring in the country are his work. Fire being opened on civilians and orders for torture are all done by him, supposedly he even participates in inflicting torture. He is also personally commanding the tank operation on Jisr al-Shughour, the town located near Turkey's border.
ERDOGAN IS ALSO CONCERNED
Speaking on a program broadcasted on atv and A Haber, Erdoğan stated the following in regards to Maher Assad; "I spoke about this with Assad, but they take it lightly. His brother's actions are not humane. There are such ugly images of them standing over the women they have murdered, it's hard to swallow."
The Syrian army has begun an operation on Jisr al-Shughour, located just 20 kilometers from the Syrian border. Allegations are that the village has been brought down. The number of civilian refugees is pushing the 4,000 figure. The man leading the operation, fast becoming a nightmare for the public, is none other than Bashar Assad's brother Maher Assad.
The Syrian military announced that they were staging an operation on Jisr al-Shughour upon 'the call of the public'. Syria's official news agency Sana states, "Syrian army units have arrested some of the armed militants in the town and neighboring villages." The statement also claims that the armed rebels are setting fires to the village surrounding forests and fields as well as to public and private sector property and are attacking security forces and cutting off their heads.
Those fearing for their lives due to the operation are seeking shelter in Turkey. As of yesterday, the number of refugees that came in to Turkey was at 3,893, including women, children, the elderly and a number of wounded. According to sources there are 5,000 Syrians along the border and that number continues to escalate. Information obtained reveals a group of 157 people turned back at the border.
TWO ADDITIONAL REFUGEE CAMPS SET UP
Upon hearing the news of the operation, two new areas were set up with tents with a capacity of 5,000 each, including the 3,500 area designated in Yayladağı. For security purposes, all of the refugee camps have been fitted with MOBESE cameras. According to officials from the District Department of Health, refugees are receiving constant check-ups and clean water, with special attention paid to pregnant women and under one-year-old babies. Former Minister of Justice and AK Party Hatay Deputy Sadullah Ergin paid a visit to the refugees. Expressing that they have opened their arms to embrace those coming in from Syria, Ergin states, "As Turkey, we will continue to provide all types of humanitarian aid to those coming in to our borders." Germany's Foreign Minister Guido Westervelle states that they will offer support to the Turkish government to assist in the thousands of refugees finding shelter in Turkey.

ALLEGATIONS CLAIM 300,000 CIVILIANS KILLED
The operation, which started at five a.m. is being led by tanks and elite forces under the control of State Leader Beshar Assad's brother Maher Assad. According to the Syrian refugees in Turkey, the area they resided has turned into a ghost town. They state that hundreds of soldiers have been situated in neighboring villages as well as 27 tanks and 50 armored vehicles. Earlier this week, authorities stated that 120 police were killed by armed militants in Jisr al-Shughour. According to BBC analysis, the Syrian military is planning to stage a much more widespread operation. Information has surfaced that the villages in the region have been demolished and the military is using disproportionate force. Yesterday, at least 22 demonstrators were claimed to have been killed in Syria.