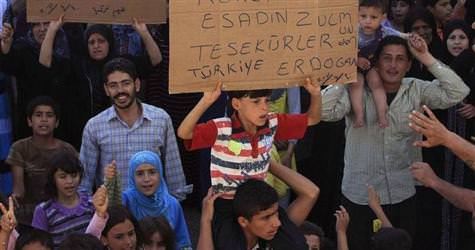 Hundreds were picked up by scores of minibuses hurtling through winding roads in villages near the border, itself only marked with barbed wire and a military road on the Turkish side.

At the Yayladağı camp in the grounds of a disused tobacco factory, they sat in large groups under the trees, closely watched by Turkish police stationed around the perimeter fence.

At one point, cheers and shouts of joy erupted in response to a false rumour President Bashar al-Assad had been overthrown.

An Arabic-speaking Turk working at the camp said refugees told him many men had stayed behind to "defend" the villages.

Almost 3,000 refugees had reached Turkey by Friday, with more expected in the next hours due to mounting unrest and demonstrations which tend to follow Friday prayers.

In a Turkish state hospital refugees with gunshot wounds frantically tried to contact friends and family to find out the fate of Jisr al-Shughour from where they had fled and where Syria's army, as anticipated, began a campaign Friday.

Syria's government said "armed gangs" killed more than 120 security personnel in the northern town of 50,000 some 40 kilometres from the Turkish border earlier this week.

News from Jisr al-Shughour was grim, and Syrian state television said that some 35 km away in Maaret al-Nouman, well-armed "terrorist groups" burnt police buildings and killed members of the security forces.

In a ward in Antakya state hospital, three Syrians shot in demonstrations at Jisr al-Shughour last week, lay side by side.

One man, shot in the thigh, knew that his family had made it to the refugee camps in Turkey. The other, a 31-year-old with a seeping bullet wound in his thigh, knew nothing of the whereabouts of his wife and children.

"We went out to protest for freedom Friday and for the downfall of the regime, because our regime is savage, criminal and murderous," the 31-year old man from Maaret al-Nouman, south east of Jisr al-Shughour said.

"I was tending a wounded person when a sniper shot me in the right thigh. I was taken to hospital, but then the doctor told us to leave because he said security forces told him not to allow anyone in hospitals."

A pick-up truck and then a car took him and other wounded to the border, where Turkish soldiers took them to hospital.

In the bed next to him a 40-year-old man said: "I was shot Saturday in my right thigh. The bullet is still inside me."

"Some of the security forces defected and there were some in the army who refused the orders of their superiors. They were firing on each other... we were protesting peacefully despite the killing that happened Friday."

Elsewhere in the hospital other wounded Syrians told of the bloodshed in the town. Ahmad Abdellatif a 27-year-old was hit by three bullets, one of which paralysed him.

His relatives from the Turkish side of the border, where many speak Arabic and whose families are scattered across both countries, sat around his bed.

"We were at a funeral of Bassel al-Masri, a martyr killed at a protest. After the funeral we assembled near a public garden. None of us were armed. Military intelligence agents opened fire at us from the rooftop of their building and from the post office," Addelladtif said.

Another injured man, who gave his name as Abu Ata, said he was among Syrian Red Crescent workers and wearing orange uniform who came to aid mourners at another funeral this week when live bullets were fired from rooftops.

"The bullet hit me from the back and went out from my chest near my heart. It was a deliberate hit aimed to kill. No one who carried me thought I will be alive today."