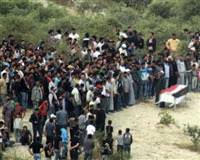 Syrian troops backed by helicopters and tanks took control of the northwestern town of Jisr al-Shughour as President Bashar al-Assad continued his crackdown against dissidents challenging his 11-year rule.

Thousands of residents of the town of 50,000 people, located on a vital road junction, fled to Turkey, about 20 km (12 miles) away, before Sunday's assault, leaving much of the town deserted.

A man identifying himself as a Syrian army defector, whose comments were streamed on the Internet and translated by Britain's Sky News television, said anti-government forces had set traps to delay the advance by Syrian troops, to let people escape.

"We waited to get about 10 percent of the population out. The remaining 90 percent had already managed to leave," the man, identifying himself as Lieutenant-Colonel Hussein Harmoush, told the online Ugarit News video news channel.

"At the moment Jisr al-Shughour is totally devoid of civilians. We are the only people that remain here."

The main Syrian activist group organizing protests said the crackdown on activists demanding democratic freedoms and an end to oppression has killed 1,300 civilians since February. Human rights groups previously had put the toll at about 1,100.

More than 5,000 Syrian refugees crossed into Turkey and a U.N. refugee spokesman said the Red Crescent was preparing a fourth camp with room for 2,500 more.

Witnesses said some 10,000 Syrians were sheltering near the border and residents said most of Jisr al-Shughour's population had fled the town.

The government said last week that "armed gangs" had killed more than 120 security personnel in the town after large demonstrations there.

Refugees and rights groups said the dead were civilians killed by security forces or soldiers who had been shot for refusing to fire on civilians. It was also possible the troops were killed by rebelling soldiers.

Syria has banned most foreign correspondents, making it difficult to verify accounts of events.

The government says the protests are part of a violent conspiracy backed by foreign powers to sow sectarian strife.

"Units of the Syrian Arab Army have taken total control of Jisr al-Shughour and are chasing remnants of the armed terrorist gangs in the woods and mountains," the Syrian news agency said.

It said one soldier and two armed men had been killed in clashes around the town, and that that army units had defused explosives planted on bridges and roads.

"I feel ashamed as a Syrian that the authorities are taking pride in occupying their own villages and towns and that repression is making people destitute and driving proud soldiers to take refuge in Turkey," Bunni said.

"The Syrian people have gone out in the street demanding their freedom and they will not leave until we get it. We saw how in Deraa when the army left the city for hours thousands were back in the streets," Bunni said.

He was referring to the southern city where a protest demanding Assad quit erupted again Friday. The cradle of the uprising, Deraa was also the first city assaulted in a military build-up to and crush the protests.

A senior Western diplomat in Damascus told Reuters: "The official version is improbable. Most people had left Jisr al-Shughour after seeing the regime's scorched-earth policy, shelling and the heavy use of armor in the valley."

"The refugee exodus into Turkey is continuing and the numbers are higher than those officially counted so far."

Residents said the army unit attacking Jisr al-Shughour was commanded by Assad's brother Maher and employed the same tactics used to crush protests in other areas.

The United States has accused the Syrian government of creating a "humanitarian crisis" and urged it to halt its offensive and allow immediate access by the International Committee for the Red Cross to help refugees, detainees and the wounded.