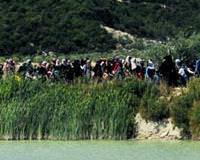 Syrian troops pushed toward the northern town of Maarat al-Numaan on the Damascus-Aleppo highway after rounding up hundreds of people in a sweep through villages near Jisr al-Shughour, fleeing residents said.

Late on Monday witnesses said troops and armored vehicles had reached the village of Ahtam, 14 km (nine miles) from Maarat al-Numaan where there have been large protests against President Bashar al-Assad's rule.

Thousands of residents of Jisr al-Shughour fled to Turkey, some 20 km away, before the army retook the rebellious town on Sunday, the latest step in its drive to crush spreading demands for political reform that pose an unprecedented challenge to Assad's 11-year rule.

The government says the three-month-old protests are part of a violent conspiracy backed by foreign powers to sow sectarian strife. Syria has banned most foreign correspondents, making it difficult to verify accounts of events.

In measures witnessed in other cities and towns besieged by troops and tanks after protests, fleeing refugees said members of the security forces and Alawite gunmen loyal to Assad, known as 'shabbiha' broke into houses and shops in Jisr al-Shughour.

Nearly 7,000 Syrians have sought sanctuary in neighbouring Turkey, which has set up four refugee camps for them. Thousands more are living rough in rural areas just inside Syria, where hours of thunderstorms and drenching rain produced miserable conditions.

Syrian rights groups say 1,300 civilians have been killed since the start of the uprising. One group, the Syrian Observatory for Human Rights, says more than 300 soldiers and police have also been killed.
Assad, who inherited power when his father died in 2000, has offered some concessions aimed at appeasing protesters, lifting a 48-year state of emergency and promising a national dialogue, but many activists have dismissed those steps.

U.N. Secretary General Ban Ki-moon, speaking at Argentina's Foreign Ministry on Monday, said the Syrian government had responded with "horrific attacks" to people's desire for change and the situation was "very worrisome."

"I again urge President Assad to allow humanitarian access to affected areas and to allow a Human Rights Council-mandated assessment mission, which on two occasions I have urged him to accept."

In New York, France's U.N. envoy appealed to skeptical Brazil on Monday to support a European draft resolution that would condemn Syria for its bloody crackdown on anti-government demonstrators.

Brazil, like India and South Africa, has expressed reservations about the draft resolution prepared by Britain, France, Germany and Portugal. Russia and China have suggested they might veto the text.

The result, U.N. diplomats said, is a deadlock on the 15-nation Security Council. It remains unclear when, and if, the Europeans will put the draft resolution to a vote.