Syrian forces round up hundreds near northwest town 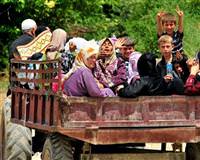 Syrian troops rounded up hundreds of people in a sweep through villages near Jisr al-Shughour on Monday, fleeing residents said, after President Bashar al-Assad's army retook the rebellious northwestern town.

Troops and armoured vehicles later pushed southeast of Jisr al-Shughour towards the town of Maarat al-Numaan on the Damascus-Aleppo highway, witnesses said, reaching the village of Ahtam, 14 km (nine miles) from Marrat al-Numaan. The town has also seen large protests against Assad's rule.

Hours of thunderstorms and drenching rain made conditions even more miserable for the thousands of people waiting in the hills on Monday, ready to flee across the border if Syrian troops advance towards them.

The government says the protests are part of a violent conspiracy backed by foreign powers to sow sectarian strife. Syria has banned most foreign correspondents, making it difficult to verify accounts of events.

In measures witnessed in other cities and towns besieged by troops and tanks after protests, fleeing refugees said members of the security forces and Alawite gunmen loyal to Assad, known as 'shabbiha' broke into houses and shops in Jisr al-Shughour.

"Three mosques were shelled. An elderly couple were killed and their home stolen. The forces are behaving with a barbarism they wouldn't exhibit if they had invaded a foreign country. They shoot at random and take what they want," said a farmer who fled the town early on Monday, giving his name as Ibrahim.

Refugees said troops were burning crops and shooting cattle in Jisr al-Shugour and surrounding villages to subdue the will of people in the strategic region among the hills between the coast and the interior plain.

Ahmad Yassin, 27, said he left his 7,000 sq metre plot of land east of Jisr al-Shughour early on Monday when 200 soldiers and men wearing black came in armoured personnel carriers and cars and poured petrol on the wheat crops.

"I tried to save my three cows but there was no time. I put my wife and two children in the car and drove straight to the border," he said.

His account of troops setting fire to crops echoed reports from other refugees, but the official state news agency has accused "armed terrorist groups" of burning land as sabotage.

Monday's wave of arrests followed an assault by troops, tanks and helicopters to regain control of the town, one week after authorities said 120 security personnel were killed there in fighting they blamed on "armed groups."

Residents and soldiers who had deserted said those killed were civilians and security personnel who had mutinied, refusing to shoot protesters and joining anti-Assad demonstrators. The casualties also included secret police who had fired on protesters, they added.

The town of 50,000, 20 km (12 miles) south of the Turkish border, is the latest focus of a military crackdown on the protests which have swept Syria for nearly three months and continue despite the deaths of hundreds of civilians.

"What happened there over the weekend and what continues to occur is absolutely revolting, and we condemn these barbaric acts in the strongest possible terms," U.S. State Department spokesman Mark Toner told reporters in comments about events in Jisr al-Shughour.

Refugees from the town said the military was combing villages to the east of the town and arresting hundreds of men between the ages of 18 and 40, in a pattern seen in other military crackdowns since the unrest started in March.

Syrian rights groups say 1,300 civilians have been killed since the start of the uprising. One group, the Syrian Observatory for Human Rights, says more than 300 soldiers and police have also been killed.

Army units "have taken total control of Jisr al-Shughour and are chasing remnants of the armed terrorist gangs in the woods and mountains," the Syrian news agency said on Sunday.

It said a soldier and two armed men were killed in clashes around the town. The army defused explosives planted on bridges and roads and uncovered mass graves holding mostly mutilated bodies of 12 security men killed by armed groups, it said.

Conscript Darwish Mohammad Sebo, 23, sneaked into the Turkish border village of Guvecci on Monday, nearly a month after deserting his post near Homs on May 14.

"I was in the front line against protesters, armed with a baton and a shield. Behind me were 'shabbiha' and forces they trust more to shoot, armed with automatic rifles. No Syrian would have accepted being in my position, seeing his compatriots slaughtered," he said.

"I paid a bribe to a lieutenant to give me sick leave and I never went back. Many more were like me. Morale is very low."

"I have been going back and forth carrying wounded people to Turkey by car or taking the martyrs to be buried in the villages," said Sebo.

Thousands of people had fled Jisr al-Shughour before Sunday's assault. Turkey has grown increasingly critical of Assad and has now set up four camps to accommodate refugees.

In a sign of tension between the neighbours, which had close trade and political ties before the crisis, supporters of Assad protested outside Turkey's embassy in Damascus on Sunday.

Turkey's Anatolian news agency said some people climbed the embassy walls and hung a Syrian flag, and Syrian security forces prevented some protesters from trying to lower the Turkish flag. The crowd then tore down tourist posters outside the embassy.

Assad, who inherited power when his father died in 2000, has offered some moves aimed at appeasing protesters, lifting a 48-year state of emergency and promising a national dialogue -- steps which have been dismissed by many activists