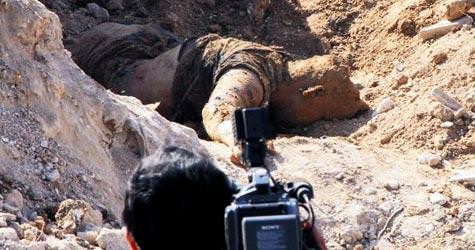 Thousands of Syrians fled the historic town of Maarat al-Numaan on Tuesday to escape tank forces thrusting into the country's north in a widening military campaign to crush protests against President Bashar al-Assad.

In the tribal east, where all of Syria's 380,000 barrels per day of oil is produced, tanks and armoured vehicles deployed in the city of Deir al-Zor and in Albu Kamal on the border with Iraq, a week after tens of thousands of people took to the streets demanding an end to Assad's autocratic rule.

"The army is coming, find safety for yourselves and your families!" echoed mosque loudspeakers in Maarat al-Numaan, a town of 100,000 that straddles the main north-south highway linking Damascus with Syria's second largest city, Aleppo.

Residents streamed toward Aleppo and to villages in the desert to the east, while some headed to neighboring Turkey, where more than 8,500 Syrians have already fled.

They sought shelter across the border to escape Assad's latest assault on protests demanding more freedoms in a country dominated by the Assad family, from Syria's minority Alawite sect, for the last 41 years. Most Syrians are Sunni Muslim.

Around 70 percent of Maarat al-Numaan's residents have fled, Othman al-Bedeiwi, a pharmacy professor there told Reuters by telephone. He said helicopters, which also fired at protesters on Friday, had been ferrying troops to a staging camp in Wadi al-Deif, several km (miles) from the town.

"We met the (provincial) governor today and he assured us that the army will go in only to arrest 360 people it has on a list," he said. "The people of Maarat, however, are skeptical."

"My name is on the list to be arrested as being a gunman. I never carried a weapon in my life."

Syria has banned most foreign correspondents since the unrest began, making it difficult to verify accounts of events.

On the edge of a limestone massif in a relatively prosperous agricultural area, Maarat al-Numaan is a center of Muslim pilgrimage with a rebellious history.

It was the site of the massacre of thousands of men, women and children by Crusader forces in 1099. In modern times, the town was focus of a brutal campaign to crush Islamist and leftist challengers to Bashar's father, the late Hafez al-Assad.

"The Muslim Brotherhood are the enemy of God and the homeland," reads a mural adorned with Syrian flags and pictures of the elder Assad at a security building in the town center.

France, with British support, has spearheaded efforts for the United Nations Security Council to condemn Assad's repression of the protests. But Russia and China have suggested they might use their veto power to kill the resolution.

The West's response has also been tempered by fears of regional instability if Syria, an ally of Iran and supporter of militant groups Hamas and Hezbollah, is tipped into turmoil.

Syrian forces pushed toward Maarat al-Numaan after arresting hundreds of people in nearby villages close to Jisr al-Shughour, residents said, as more refugees fled to Turkey.

Fleeing refugees described shootings by troops and Alawite gunmen loyal to Assad, known as "shabbiha," and the burning of land and crops in a scorched earth policy to subdue people of the region after large protests against iron-fisted rule.

The Syrian Observatory for Human Rights said a man, his wife and two children were shot dead as they were crossing a bridge near Jisr al-Shughour, which the army and Assad's loyalists have occupied since Sunday.

Syrian state television said government forces "are continuing to carry out their mission of pursuing and hunting down the remnants of the members of terrorist armed organizations in the areas surrounding Jisr al-Shughour in order to enable the residents to return to their neighborhoods."

Syrian rights groups say 1,300 civilians have been killed since the start of the unrest in March. One group, the Syrian Observatory for Human Rights, says more than 300 soldiers and police have also been killed.

Thousands of Syrians are living rough just inside Syria.

Dozens of refugees with mud covering their boots and clothes made their way to a Turkish village to find bread for families waiting across the border in Syria in sodden makeshift camps.

Reuters footage showed refugees on the Syrian side of the border trying to dry ran-soaked blankets, children washing in buckets of rain water, and people lying under plastic sheets.

"We are desperate here. We are under the rain, our children are sick. We have no medicine and no food," said a crying woman with a baby lying next to her.

Most of the refugees came from Jisr al-Shughour, 20 km (12 miles) from the border.

Authorities say gunmen killed 120 security personnel in the town were killed by gunmen 10 days ago. But witnesses said residents assisted by army mutineers attacked the military intelligence headquarters in the town after intelligence agents killed 48 civilians during two days following a large protest.

"Around 60 military intelligence agents were killed at their headquarters and at the post office, from where they were firing at protesters. They included 20 agents who had mutinied," a resident of Jisr al-Shughour who fled a subsequent tank and troop assault, told Reuters.

He added that the head of the military intelligence division in the town, a man known as Abi Yarub, was "the last one to be killed by the people."

The government says the three-month-old protests are part of a conspiracy backed by foreign powers to sow sectarian strife.

In the eastern province of Deir al-Zor, witnesses said that several tanks deployed inside the city, which is on the Euphrates river, but protests continued.

"Protesters in the last two days have climbed the tanks and were not stopped. But the tanks are few and more forces could be coming," a Deir al-Zor resident said.

Rights campaigners said around 20 tanks and armoured vehicles deployed around the town of Albu Kamal to the east of Deir al-Zor, which is also an official crossing point to Iraq, but that there were no troops inside the town.

Turkey has set up four refugee camps just inside its borders and the state-run Anatolian news agency said on Tuesday authorities might provide more. It said the number of refugees had reached 8,538, more than half of them children.

Anatolian also reported that Assad phoned Turkish Prime Minister Tayyip Erdoğan to congratulate him on his election victory two days ago. It said the Turkish leader told Assad to avoid using violence against his people and launch reforms as soon as possible.

Erdoğan, who has had a close rapport with Assad, had said before being re-elected that once the election was over he would be talking to Assad in a "very different manner."

The United States has urged Assad to lead a transition to democracy or "step aside," but unlike France it has not yet declared that Assad has lost his legitimacy to rule.

"What happened there over the weekend and what continues to occur is absolutely revolting, and we condemn these barbaric acts in the strongest possible terms," said State Department spokesman Mark Toner, referring to events in Jisr al-Shughour.