Angel of aid comes to Hatay 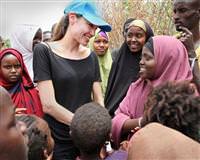 The United Nation’s Good Will Ambassador and famous movie star Angelina Jolie is arriving in Turkey tomorrow to visit the Syrians taking shelter in Turkey. Receiving an affirmative response from Ankara, Jolie will share the drama experienced by the refugees to the world.

Internationally acclaimed actress Angelina Jolie has not remained indifferent to the ongoing crisis in Syria. According to sources the American actress has made a request to visit the refugees taking shelter in Turkey following the Sunday operation staged by Assad's troops.
Foreign Affairs Ministry spokesman Selçuk Ünal has announced that 36-year-old Jolie, who along with her movie career is also a United Nations Goodwill Ambassador, has requested to visit the camps set up in Turkey for Syrians seeking refuge. Ünal stated that the request was currently being evaluated. According to information obtained by AA's diplomatic sources, Jolie's request to visit will be responded to affirmatively by Ankara and she is supposedly arriving to Turkey on Friday.
Jolie's expected to first arrive to Istanbul and then later to Hatay. The Oscar-winning actress spent 18 days in 2001 visiting Sierra Leone and Tanzania. Since then she has donated one million dollars to Afghanistan refugees and in 2001 was named a Goodwill Ambassador to the U.N. Participating in efforts for refugees in almost 20 different nations including Kosovo, Kenya and Pakistan, most recently she visited the Libya – Tunisia border to inspect the refugee camps set up there.

DAVUTOĞLU VISITS REFUGEES
Foreign Affairs Minister Ahmet Davutoğlu paid a visit to the Syrian nationals waiting in Syria's Harapgöz village border area, close to the Yayladağı district. After speaking with Syrians there for awhile, Davutoğlu went on to inspect the temporary tent city set up at the former Tekel factory in Yayladağı. Minister Davutoğlu also visited the wounded in the hospital's set up in the tent city and obtained information on the individuals from officials.
United Nations Spokesman Martin Nesirky states that Turkish officials are working extremely hard at helping the Syrians arriving in Hatay.

'TURKS ARE DOING GOOD'
Stating that reports are coming in that Syria has arrested 10,000 people and that over 1,100 people have died, United Nations High Commissioner for Human Rights Navi Pillay has called for a widespread investigation be conducted to verify these allegations. According to the latest report released by the London based Syria Human Rights Observation Center, up until now 1,297 civilians and 340 security forces have been killed.