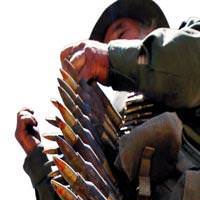 Libyan rebels have pushed deeper into government-held territory from their base in the Western Mountains, taking two villages from which forces loyal to Muammar Gaddafi had been shelling rebel-held towns.

But the rebels are still a considerable way from Gaddafi's main stronghold in Tripoli, while their fellow fighters on the other two fronts -- in Misrata and in eastern Libya -- have made only halting progress against better-armed government troops.

The rebel advance some 150 km (90 miles) southwest of Tripoli on Wednesday, came as the White House insisted that President Barack Obama had the legal authority to press on with U.S. military involvement in Libya.

Strains have begun to show in the Western alliance trying to topple Gaddafi. The U.S. defence secretary rounded on European allies last week for failing to back the mission the alliance took over in late March.

The White House urged sceptical lawmakers not to send "mixed messages" about their commitment to the NATO-led air war that has helped the rebels push on from their bastion in the east.

"The revolutionaries (rebels) now control Zawiyat al-Babour and al-Awiniyah after pro-Gaddafi forces retreated this morning from the two villages," Abdulrahman, a rebel spokesman in the nearby town of Zintan, told Reuters.

In Gharyan, a Gaddafi-held town that forms the gateway from Tripoli to the mountains, there was an undercurrent of tension as the frontline moves closer to the capital.

Libyan government minders took a group of reporters to the town, which lies about 120 km southwest of Tripoli and about 20 km east of Kikla, which rebels seized from loyalists on Tuesday.

Despite an outward appearance of normality, walls around town on Wednesday had recently painted over graffiti. The windows of one government building were smashed, the sign for another was riddled with holes.

While many traders and people on the streets were reluctant to talk to reporters, one shop owner said the calm in the area during the day was replaced by fighting every night.

"Two thirds of the people here are for the rebels," he told Reuters, giving his name as Mohammed.

Those willing to talk in front of the minders were strongly pro-Gaddafi.

"Sarkozy is stupid, he is fighting this war for petrol," a man called Yunis said in French, referring to the French president, vilified by Gaddafi supporters as the driving force behind NATO bombing. "This is colonialism all over again."


TIME ON OUR SIDE

The NATO military alliance, which has been pounding Gaddafi's military and command-and-control structures for nearly three months, has failed to dislodge him. A series of explosions was heard from Gaddafi's sprawling Tripoli compound in the early hours of Thursday and plumes of smoke rose into the sky.

Russia's envoy to NATO, Dmitry Rogozin, said the alliance was "sliding down and being dragged more into the eventuality of a land-based operation in Libya".

Ties are becoming strained in the alliance, with some NATO members complaining that others have been reluctant to commit additional resources. [ID:nLDE75E0GG]

Tension in Washington itself over the conflict reflects unease over U.S. entanglement in a third conflict in the Muslim world in addition to wars in Iraq and Afghanistan and pressure for Obama to clarify U.S. goals in the North African country.

The cost of U.S. military operations and humanitarian assistance in Libya was $716 million as of June 3 and was projected to reach $1.1 billion by Sept. 30, 2001, according to a White House a report to Congress released on Wednesday.

"We believe that it's important for Congress not to send mixed messages about a goal that we think most members of Congress share," White House spokesman Jay Carney said.

Speaking in London after meeting NATO Secretary General Anders Fogh Rasmussen, British Prime Minister David Cameron reiterated that time was running out for Gaddafi and that the alliance was as determined as ever.

"I think there is a very clear pattern emerging which is time is on our side, because we have the support of NATO, the United Nations, the Arab League, a huge number of countries in our coalition and in our contact group," he said.

"Allies and partners are committed to provide the necessary resources and assets to continue this operation and see it through to a successful conclusion," Rasmussen said.

In a theatrical show of defiance, Gaddafi was shown at the weekend playing a game of chess with a Russian official, but after weeks of ambivalence, Moscow has joined Western countries this month in calling for Gaddafi to step down.

Saad Djebbar, a former legal adviser to the Libyan government, told Reuters Gaddafi would continue to play for time and seek to demoralise and split the coalition.

"Gaddafi's mentality is that as long as my enemies haven't triumphed, I haven't lost," he said.

Gaddafi has said he has no intention of leaving the country -- an outcome which, with the military intervention so far failing to produce results, many Western policymakers see as the most realistic way out of the conflict.

At the United Nations, Britain's ambassador urged the African Union to send a strong message that he should go, adding there could be no ceasefire as long as he remained in power.

Gaddafi's government approved a $31.4 billion budget for the rest of 2011, the official news agency said, in an apparent move to show it was functioning despite air strikes and sanctions.

The Libyan leader has described the rebels as criminals and al Qaeda militants, and called the NATO intervention an act of colonial aggression aimed at grabbing Libya's oil.

Though under attack from NATO warplanes and rebel fighters, Gaddafi's troops have showed they are still a potent force.

A rebel spokesman in Nalut, at the other end of the Western Mountains range from Zintan, said Gaddafi's forces had been shelling Nalut and the nearby border crossing into Tunisia. The rebels depend on that crossing to bring in supplies.