Cracks in Syrian army after 3 months of protest 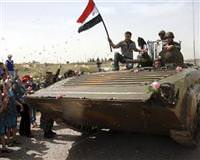 The 45-year-old president is relying increasingly on the army, whose command and many senior officers are drawn from his minority Alawite sect, in a military campaign seen as targeting protesters drawn mainly from the majority Sunni community.

Diplomats and military experts say mostly Alawite units have been implicated in the worst bloodshed in the unrest, angering many Sunnis and triggering some army desertions, but so far no major defection of troops.

"It is still unclear what threshold would have to be crossed in order for mass defections to start occurring (so) that other Sunni conscripts would view defection as a more viable option," said W. Andrew Terrill, who has studied the Syrian army at the U.S. Army War College in Carlisle Barracks, Pennsylvania.

The most loyal army units are the mainly Alawite divisions commanded by Assad's brother Maher, including the Republican Guard and the Fourth Armoured Division, each of which have around 10,000 men, backed by tanks.

They are better trained and paid than the rest of the army, which numbers over 200,000 troops including conscripts, and are helped by smaller loyalist units and Alawite militias in several parts of the country.

Experts say that as the military build-up continues in restive regions, prompting further protests, the so far small-scale defections in rural areas could widen to higher ranks and larger numbers.

High-ranking Syrian soldiers and police were among more than 8,000 refugees seeking shelter in Turkey from the crackdown in northern Syria, Turkey's Anatolian news agency said.

But activists said there was a strong ideological streak in the military, which would resist sectarian splits, and that four decades of Assad family rule had focused the army's mission on protecting the Syrian leadership.

"The army will be divided only if the regime collapses, not before. It is an ideological army and all officers are Baathists," said one activist, referring to the ruling Baath Party.

Terrill said soldiers and conscripts were tightly controlled by a secret police force which made "ordinary Syrian soldiers view themselves as closer to inmates in a prison than people with real options."

"The final acid test would be if troops felt that by their defection they could help defend their own homes and communities once these come under attack," he said.

"In that case, they would come under enormous psychological pressure to desert the army."

Among them was Assad's father Hafez, who became defense minister and, in 1970, president.

The protests against his son, Bashar, erupted in March in conservative rural Sunni regions and spread to the outskirts of Damascus and the commercial hub of Aleppo. Rights groups say 1,300 civilians and 300 police and soldiers have been killed.

A diplomat said dissatisfaction among Sunni ranks was increasing as the uprising continues and the army rank and file discover the scale of the killings in their home areas, such as the Hauran Plain in the south, cradle of the uprising, Homs province, and the northwest region bordering Turkey.

In a sign that the Sunnis may be less willing to fire at protesters, witnesses said the army deployed several tanks this week near a football field in the city of Deir al-Zor, but soldiers did not fire as demonstrators passed and climbed tanks.

"I talked with one tank crew. They were from Hama. I asked the commander of the tank 'Don't you know that 71 demonstrators were killed in Hama on Friday three weeks ago?'" said a resident, who works as a computer engineer.

"He said: 'We know but we are soldiers.' All the time they were looking behind their back to see if there was an officer watching them," he said.

The tanks withdrew from Deir al-Zor, the capital of an eastern tribal province that borders Iraq's Sunni heartland, this week, in a rare instance of army deployment that did not result in bloodshed.

Two defecting Sunni conscripts who had fled to Turkey said the army banned vacations three months ago, restricting access to their families in areas under assault. In the town of Maarat al-Numaan, residents said a funeral was held this week for Hammoud Yehia Hassan, a soldier in his 20s, who they say was shot after refusing to fire at demonstrators.

A strategic studies professor in Jordan, who declined to be named to avoid sensitivities with Syria, said that the army remained in the grip of Assad and his brother, but that one major outbreak of bloodshed could spin Sunni units out of control.

"The Sunnis are boiling under the surface and Assad cannot control events," he said.

A Syrian army ex-officer, who served in air force defense, recalled how he was the only Sunni officer among seven Alawites at his missile battery unit.

"I think that the Sunnis in the army are counting on the silent majority of Syrians who are no longer shutting up and (who are) going to the streets before they move.

"The price will be more martyrs. Whether the Sunnis can overcome the much better equipped Alawite units is a different matter, but at least they could provide protection for the demonstrations," he said.