Israel to stop Gaza flotilla regardless of cargo 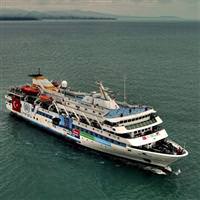 Israel will do everything necessary to prevent a planned international flotilla from reaching Gaza, despite the fact the ships will probably not be carrying weapons, a senior military source said.

The source, who declined to be named, said Israel's maritime blockade would only be deemed legal if it imposed a total exclusion zone around the small Palestinian enclave and urged the flotilla organizers not to challenge the navy.

"No ship will get into Gaza," the source said, adding that the military had drawn up new tactics in an effort to avoid last year's bloodshed, when Israeli marines killed nine activists after intercepting their group of six ships in international waters.

Pro-Palestinian groups are planning a new flotilla, which they say will carry humanitarian aid to Hamas-controlled Gaza, and hope to set sail this month. The senior security source said he expected 10-15 ships to take part.

"I believe that with this flotilla there won't be any arms smuggled into Gaza," he told a group of reporters.

"But a maritime security blockade can only be legal if it is effective and complete. You cannot keep a selective maritime blockade under international law. You can't say who gets in and who doesn't," he added.

Israeli officials have long argued that aid flotillas could be used as a cover to help supply weapons to Hamas, an Islamist group which refuses to recognize Israel and regularly fires rockets and mortars into the adjoining Jewish state.

Palestinians believe the Israeli sea blockade is illegal and say it is helping strangle the underdeveloped Gazan economy.

MILITARY OPERATING IN A PR WORLD

The Israeli military came under fierce criticism for its assault on a Turkish-sponsored flotilla in May 2010.

It said its soldiers had not expected the violent resistance they faced when they boarded the lead vessel, Mavi Marmara, and had to open fire in self-defense, killing eight Turks and one American-Turk.

On Wednesday, Israel carried out a large simulation exercise at sea to prepare for any new confrontation and the source said everything possible would be done to prevent direct clashes.

"We are being asked to do a military operation in a PR arena. We are trying to find better tactics to keep injuries of activists to a minimum," he said.

Critics said the navy should have used water cannon to try to halt the ships or done more to disable the engines. Video footage from Wednesday's exercise broadcast by the military showed Israeli ships practicing the use of water cannon.

Israel has said the activists can unload their cargo either at its Ashdod port or in Egypt, where it could be checked before being delivered by truck to the Gaza Strip.

Israeli officials argue that deliveries of many goods into Gaza from its two neighbors means there is no humanitarian crisis in the enclave and therefore no need for aid shipments.

"If the sea line is opened, then Gaza will be flooded with arms and rockets," the senior official said.

Palestinians say rigid controls are preventing the import of badly needed materials and warn that the prolonged isolation of Gaza plays into the hands of Islamist militants.