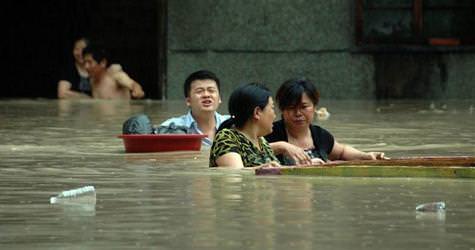 China has mobilized troops to help with flood relief and raised its disaster alert to the highest level after days of downpours forced the evacuation of more than half a million people in central and southern provinces.

The official China Daily said more than 555,000 people had been evacuated in seven provinces and a municipality after rains in recently drought-stricken areas caused floods and mudslides in the Yangtze River basin.

Central authorities have raised the disaster alert to the highest level 4, and the government is describing the floods in some areas, such as eastern Zhejiang province's Qianting River area, as the worst since 1955.

Local media said two dykes in the village areas of Zhuji in Zhejiang province were breached on Thursday, flooding two towns and 21 villages.

In the flood-hit Banshan and Moshan villages on the outskirts of Zhuji, hundreds of people had been evacuated, but many have since returned to guard their homes and belongings.

"For us now, we will be worried if we leave our homes. That's why we are still staying here. Yesterday, the water level was receding slowly so we came back to clean up our house," said 49-year-old Jie Jingping.

Jie is staying put in her flooded home with her daughter and elder sister. The first floor of her village home is completely inundated and she has moved all their belongings to the second and third floors.

She said the local government has been distributing a box of instant noodles and a carton of bottled water to every family as flood aid.

Other villagers said life was tough for some residents who were still trapped deep inside the village by the flood waters as aid distribution has been slow.

"Some did not even get any relief items. There is no electricity and you get bitten by mosquitoes all the time," said 25-year-old Shou Pengfei.

"To be frank, those rescue boats cannot go through those narrow lanes inside the village. A lot of them depend on their relatives rowing small wooden boats to get to them... It is hard to help these people inside there," he added.

State media said that as of Thursday evening, floods caused by the most recent four days of rain had resulted in 19 deaths and left seven missing in Anhui, Zhejiang, Jiangxi, Hubei, Hunan, Sichuan and Guizhou provinces and Chongqing municipality.

The official death toll caused by floods and mudslides since June 3 has not been updated since Wednesday when state media said at least 105 people had been killed and 65 were missing.

Forecasters warned on Thursday (June 16) that in the coming days rain could bring fresh danger, including in the southwest. The downpours are not expected to ease until Sunday.

The China News Service reported on Thursday that in Jiangxi province in the east, troops helped 122,400 residents move from vulnerable, low-lying areas.

State media have not given a total number of troops mobilized for the relief effort.

In central Hubei province, downpours two days ago triggered a landslide that left six people missing and blocked the Pingdu River, forcing 2,000 residents to flee in case a wall of water burst through the mud and debris.