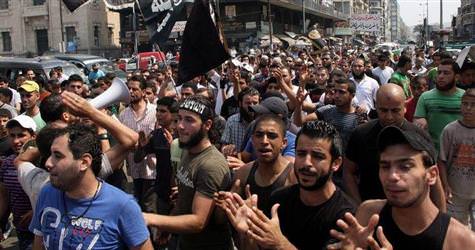 Syrian forces shot dead 19 people on Friday when they fired at demonstrators demanding the removal of President Bashar al-Assad in the biggest protest since unrest against Baathist rule erupted in March, activists said

European powers, which had initiated a detente with Assad prior to the street protests to try to draw the Syrian leader away from Iran and also stabilize Lebanon, said Damascus should face tougher sanctions for the violence.

Tens of thousands of people rallied across the country, defying Assad's military crackdown and ignoring a pledge that his tycoon cousin Rami Makhlouf, a symbol of corruption, would renounce his business empire and channel his wealth to charity.

"Protests last week were big and this week they are bigger still. The demonstrators have not held squares consistently yet in big cities like we had seen in Egypt, but we're heading in this direction," opposition figure Walid al-Bunni told Reuters by telephone from Damascus.

"The security grip is weakening because the protests are growing in numbers and spreading, and more people are risking their lives to demonstrate. The Syrian people realize that this is an opportunity for liberty that comes once in hundreds of years," said Bunni, who was a political prisoner for eight years.

The worst bloodshed was in Homs, a merchant city of one million people in central Syria, where the Local Coordination Committees, a main activist group linked to protesters, said 10 demonstrators were killed. State television said a policeman was killed by gunmen.

One protester was also reported killed in the northern commercial hub of Aleppo, the first to die there in the unrest.

The Syrian Observatory for Human Rights, which operates from Britain, said it could confirm only 10 civilians killed overall in Syria.

The Syrian government has barred most international journalists from the country, making it difficult to verify accounts from activists and officials.

Friday Muslim prayers have provided a platform for the biggest protests, inspired by revolts across the Arab world.

Witnesses and activists said tens of thousands of people protested in the southern province of Deraa where the revolt began, as well as in the Kurdish northeast, the province of Deir al-Zor, which borders Iraq's Sunni heartland, the city of Hama north of Damascus, the coast and suburbs of the capital itself.

Two towns on the main Damascus-Aleppo highway north of Homs were also encircled by troops and tanks, residents said, five days after the army retook the town of Jisr al-Shughour, sending thousands feeling across the nearby border into Turkey.

Refugees from the northwestern region said troops and gunmen loyal to Assad, known as 'shabbiha' were pressing on with a scorched earthed campaign in the hill farm area by burning crops, ransacking houses and shooting randomly.

The International Federation for Human Rights and the U.S. based Damascus Center for Human Rights Studies said in a statement that, according to local sources, the Syrian forces killed more than 130 people and arrested over 2,000 in Jisr al-Shughour and surrounding villages over the last few days.

The number of refugees who had crossed over from Syria has reached 9,600, and another 10,000 were sheltering by the border just inside Syria, according to Turkish officials.

Syrian rights groups say at least 1,300 civilians have been killed and 10,000 people have been detained since March.

The Syrian Observatory for Human Rights said more than 300 soldiers and police have also been killed.

Assad has responded to the unrest with a mix of military repression and political gestures aimed at placating protesters.

Assad faces international condemnation over the violence, and has seen the first signs of cracks in his security forces after a clash in Jisr al-Shughour earlier this month in which the government said 120 security personnel were killed.

There have been no mass desertions from the military, but the loyalty of Sunni Muslim conscripts might waver if the crackdown on mainly Sunni protesters continues.

Assad's family and many military commanders are members of the Alawite sect, an offshoot of Shi'ite Islam.

Their discussion focused on "how the U.S. and Russia can work together to make sure that we can get to a U.N. Security Council resolution," a State Department spokeswoman said.

Russia and China dislike the idea of any Council judgment on Syria and have played little role in discussions on a draft resolution to condemn Syrian bloodshed against protesters.

French President Nicolas Sarkozy said France and Germany had agreed to lobby for stronger sanctions against Syria for "unacceptable actions and repression" of protesters.

"I believe there is a realization that force is being used against the people in a way that is not acceptable," German Chancellor Angela Merkel said after talks with Sarkozy. "Therefore both of us will talk to Russia in our own ways to (ensure) we are successful."

A witness in the Damascus suburb of Irbin said protesters burned a Russian flag to protest against Moscow's stance.

In the northern Lebanese city of Tripoli two people were killed in a clash between Sunni and Alawite residents, a military source said, after an anti-Assad demonstration erupted following noon prayers.