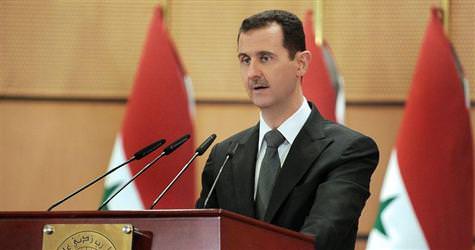 Syrian President Bashar al-Assad's promise on Monday to prepare a range of political reforms offers no prospect of appeasing the three-month-old uprising against his autocratic rule.

Speaking in public for only the third time since the unrest erupted in March, he pledged new laws covering parliamentary elections, political parties other than his Baath Party and the media, and held out the possibility of a new constitution.

But like his two earlier speeches, there was little immediate or concrete concession to protesters, many of whom are demanding Assad step down and say dialogue is impossible while he pursues a violent military crackdown on dissent.

Assad said the proposed new laws would be discussed in a national dialogue, but dismissed any prospect of a political solution with what he said were armed groups behind the turmoil.

"What he is offering is too little too late -- for the Syrian opposition, he has lost legitimacy with all the deaths," said Lebanese analyst Ousama Safa.

Syrian rights groups say more than 1,300 civilians have been killed by security forces since the unrest broke out in March. The Syrian Observatory for Human Rights also says 340 Syrian soldiers and police have also been killed.

Around 10,000 people have been arrested and are still detained, while a similar number fled to neighboring Turkey.

"He should have taken drastic measures, like putting some people on trial, introduce an immediate change to provide a major concession, shut down few intelligence agencies, fire some people, issue presidential decrees," Safa said. "But now to offer dialogue...this does not work. It is too late."

Shortly after Assad finished speaking, fresh demonstrations broke out in Damascus suburbs and the coastal city of Latakia, underlining protesters' dissatisfaction with the speech.

"The regime has no realization that this is a mass street movement demanding freedom and dignity," opposition figure Walid al-Bunni said. "Assad has not said anything to satisfy the families of the 1,400 martyrs or the national aspiration of the Syrian people for the country to become a democracy."

Activists say the ruthless military crackdown on demonstrators has only helped fuel the protests, and Assad's praise for the army suggested there would be no stepping back from confrontation.

"Until the army returns to its barracks, we have to support the army and help the army and ask it to help us," he said.

Assad's proposed timeline, pledging changes within months, contrasted with a warning from neighboring Turkey that he had just a days to deliver reforms.

"The demands in this field will be for a positive response to these issues within a short period that does not exceed a week," Ersat Hurmuzlu, an adviser to Turkish President Abdullah Gul, told Al-Arabiya Television.

Without swift action, Hurmuzlu said there would be a danger of "foreign intervention," and said Turkey would be following his speech carefully.

Analysts say there is little chance of foreign military action against Syria, such as the NATO bombing in Libya, but European countries have submitted a draft resolution to the U.N. Security Council to condemn Assad's crackdown on protesters.

Turkish Prime Minister Tayyip Erdogan had grown close to Assad in recent years but has been increasingly critical of the "savagery" of his repression of the protests.

The European Union and United States have also imposed sanctions on the president and his closest allies in Damascus.

Hilal Khashan, a political scientist at the American University in Beirut, said Assad's speech was addressed as much to the outside world as to the protesters.

"He was trying to placate his Turkish neighbors by giving a timetable, (but) he did not spell out the reforms," Khashan said. "He doesn't seem much concerned about his people. He is concerned about Turkey and the West."

Khashan said that despite facing Western sanctions and growing international condemnation, Assad knew that Western leaders would be unwilling to intervene directly in his country, whose alliance with Iran, influence in Lebanon and tensions with Israel put it at the heart of Middle East politics and conflict.

There are widespread fears of volatile instability in the region if Assad and his system were toppled precipitously.

"...No one (outside Syria) is interested in seeing Assad go. The U.S. says Assad lost most of his legitimacy. But that little remaining bit (of legitimacy) doesn't seem to end.

"He knows the international environment is conducive to his survival and he is trying to placate that."