Assad offers no sign of easing grip over Syria . 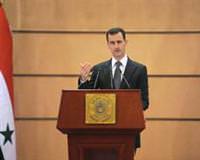 Syrian President Bashar al-Assad's pledges of political reform offer little sign that he is prepared to ease his family's four-decade grip on power and deliver Syria from its most serious crisis in decades.

Breaking a two-month silence on Monday to tackle the wave of protests against his rule, Assad promised new laws on political parties and elections and a review of the constitution which enshrines the ruling Baath Party at the centre of politics.
But his speech was met with a chorus of angry disappointment from world leaders and activists, who said it was too little, too late, and too vague.
Criticism predictably poured in from Washington and the European Union, which had already imposed sanctions on Assad and his top officials in response to a military crackdown in which rights groups say 1,300 civilians have been killed.
Even neighbouring Turkey, which has cultivated close ties with Assad, indicated it was losing patience after repeatedly urging him to implement swift and decisive reform.
"Assad should clearly and precisely say: 'Everything has changed. We're transforming the system into a multi-party one," President Abdullah Gul said.
A Syrian activist group dismissed Assad's speech as "a repetition of unrealised promises (and) veiled threats" which failed to address the crisis in Syria or the aspirations of tens of thousands still demonstrating in defiance of the crackdown.
While accepting that Syria faced a grave crisis and acknowledging criticism over the slow pace of change, Assad repeated themes of his two previous speeches in March and April -- that the country faced a foreign conspiracy and that the violence was the fault of criminals and religious extremists.
He made no mention of any role security forces played in the bloodshed and sought to distinguish between people with rightful demands and "saboteurs" he said were behind unrest.
"He did not give any indication on the core issue that he is willing to facilitate a genuine transition away from the continued monopoly on power of his family and the ruling Baath Party," said analyst Julien Barnes-Dacey of Control Risks.
"He is following the failed path of the other regional leaders by seeking to delegitimise the opposition while simultaneously resorting to a harsh security crackdown."

"LACK OF LEADERSHIP"
A Damascus-based analyst, who declined to be named because of the sensitivity of the issue in Syria, said Assad had missed another opportunity to stake out a credible way forward.
"He failed to address the two fundamental issues that have come to shape the crisis in the eyes of many Syrians, namely the dismal behaviour of the security services and his own lack of decisive leadership," he said.
Assad said more than 100 people "from different sections of society" would be invited within days to consultative meetings to discuss the framework of a national dialogue promised by the government more than a month ago.
Opposition figures have yet to formulate a response to any invitation to join the meetings, but several have said that no dialogue can succeed while the security crackdown continues and thousands of political detainees remain in jail.
Even were they to attend, it is not clear what impact that would have on street protests which initially called for greater freedom but which for weeks now have demanded Assad's overthrow.
"It is hard to see a simple pathway to implementing this reform program," said Ayham Kamel, an analyst at Eurasia Group.
"Military force will still be utilised to confront at least part of the opposition. This would make it hard for many opposition figures to enter a negotiation process with the regime or join the national dialogue committee."
Kamel said the speech was likely to polarise Syrian society, with Assad loyalists seeing it as proof that the president was ready for tangible concessions, while opponents dismiss it as inconsequential.
Those tensions were visible in several Syrian cities on Tuesday, as tens of thousands of Assad supporters rallied in cities across the country, leading to clashes with protesters in which activists said security forces shot dead seven people.
"There are fractures that run through Syrian society, and the regime is seeking to play on those to cement its hold on power," Barnes-Dacey said. "If this conflict becomes militarised there is a real prospect of some form of civil war."
He said that while security forces could help Assad maintain his grip in the short term, the deadlock with protesters and the deteriorating economy -- hit by a collapse in tourism and a likely halt in foreign investment -- meant his prospects over the coming months and years were less certain.
Assad himself acknowledged that the most dangerous prospect was "the weakness or collapse of the Syrian economy", urging people to work together to "restore confidence" in the economy.