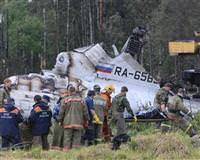 A young boy who was severely injured in a plane crash in northwestern Russia has died, bringing the toll in the country's worst air disaster in over a year to 45, emergency officials said on Wednesday.

Anton Terekhin died overnight in a hospital in Petrozavodsk, the regional branch of the Emergency Situations Ministry said on its website. The ministry said Terekhin was 10 years old, but some Russian media reports said he was nine.

He was the youngest of eight people who escaped alive from the wreckage of a Tupolev Tu-134 jet that crashed late on Monday while trying to land in fog at the airport outside Petrozavodsk, in the Karelia province 700 km (430 miles) northwest of Moscow.

Health Minister Tatyana Golikova had said on Tuesday that Terekhin, whose 14-year-old sister was also injured, had lost a lot of blood and was in an extremely grave condition.

Initial information indicated the plane veered off course while approaching the airport in fog and struck a power line, briefly blacking out the runway lights before it crashed, Deputy Prime Minister Sergei Ivanov said on Tuesday.

It was the deadliest air disaster in Russia since Polish President Lech Kaczynski's official plane crashed near the western city of Smolensk in a thick fog in April 2010, killing him and all 95 others on board.