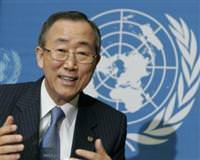 The 192-nation U.N. General Assembly on Tuesday unanimously approved a second five-year term for U.N. chief Ban Ki-moon, who analysts and diplomats see as a solid ally of Washington.

The former South Korean foreign minister, who took over as U.N. secretary-general from his predecessor Kofi Annan in 2007, was re-elected to the world body's top job by acclamation, effective next January 1.

Ban, 67, was unopposed, making his re-election a virtual certainty after the Security Council last week recommended he continue at the helm of the United Nations. He thanked the U.N. member states for the "great honor" they bestowed on him but later told reporters he had much unfinished business.

"Seldom has the United Nations been more relevant and never has it been more necessary," he added.

U.S. Ambassador to the United Nations Susan Rice welcomed Ban's re-election and praised his performance in "one of the toughest jobs in the world."

"No one understands the burdens of this role better than he," Rice said, adding that Washington was "grateful that he is willing to take them on."

All the regional groups of U.N. member states backed Ban, including the Latin American and Caribbean group, the last to officially endorse his re-election.

U.N. officials and diplomats had said Cuba, Barbados and others held up the group's endorsement amid complaints that Ban had neglected the region. Havana denied causing a delay.

Under an unwritten U.N. rule, the job of secretary-general rotates among the world's regions and may not be held by a citizen of one of the five permanent Security Council members -- the United States, Britain, France, Russia and China.

It is normal for an incumbent to serve two five-year terms, although Egypt's Boutros Boutros-Ghali was ousted after one term in 1996 by the United States, which felt he had performed poorly over the war in Bosnia.

Despite a run-in with Moscow over Kosovo in 2008 that U.N. diplomats say elicited a threat to veto his second term, Ban worked hard to avoid upsetting the council's five veto powers.

Diplomats and analysts say that Ban has been especially sensitive to the wishes of the United States, which hosts U.N. headquarters in New York, and has proven to be a solid ally of Washington. That led to some grumbling by left-wing governments in Latin America and some envoys from developing nations.

Hillel Neuer, head of the Geneva-based human rights group UN Watch welcomed Ban's re-election, saying he was a "principled leader who has advanced the cause of human rights in some of the world's most troubled areas." Human Rights Watch, however, has accused him of being too soft on China.

Analysts see Ban, noted for his self-deprecating manner and imperfect command of English, as a tireless worker and inveterate globe-trotter, but say his tenure so far has a mixed record on the issues he has championed.

Global U.N.-led negotiations on climate change have made little progress, and the U.N. role in combating world poverty has been challenged by the rise of the Group of 20 nations.

Years of U.N. mediation in conflicts from Cyprus to Western Sahara have produced no results so far. Ban won a success in Ivory Coast this year with a firm U.N. line on election results that led to the ouster of Laurent Gbagbo, who had clung to the presidency despite world agreement that he had lost the vote.

Ban has also won praise for his encouragement of the "Arab Spring" of pro-democracy movements that has swept the Middle East and North Africa, and his personal exhortations to the region's autocratic rulers not to use force against protests.