Egypt army may pull strings from barracks in future 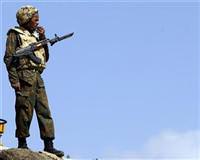 Hossam el-Hamalawy is used to being in trouble with the authorities. State security hauled him in three times for his activism when Hosni Mubarak was in power. He hoped Egypt's uprising would end such summonses. It didn't.

He was called in again in May for questioning. But one element changed. It wasn't internal security but an army general who wanted to question the blogger over accusations he made on television about abuses by the military police.

"We didn't have this revolution ... so that we would replace Hosni Mubarak with the military as a taboo," said Hamalawy, insisting that the army must change its ways.

"The military institution is part of the old regime," he said. "It will have to go through its own change in revolutionary Egypt."

The army has vowed to hand power to civilians, after it took control when Mubarak was ousted on February 11.

Few doubt it wants to quit the grimy world of day-to-day government but, at the same time, few expect the generals to submit to civilian command when they return to barracks.

Instead, analysts say the military is likely to slip into the political shadows, as a protector of national security -- a broad brief that would allow some back-seat intervention -- and rigorously guard its business interests and other privileges.

The military has after all supplied Egypt's rulers, including former air force commander Mubarak, for six decades.

"I do feel they are sincere about handing over power to a civilian government," said Hamalawy, who writes the arabawy.org blog. "But that does not mean they will give up ... their role in the Egypt political arena."

After summons for interrogation prompted protests, Hamalaway said the general who quizzed him on May 31 promised to examine evidence he provided of any abuses by the military police.

Such incidents, played out in public and drawing the ire of Egyptians enjoying a new-found assertiveness, can only tarnish the reputation of an army which was sky-high when troops took control of the streets from Mubarak's widely reviled state security forces.

The army has committed to a parliamentary vote in September and presidential poll to follow.

"The Egyptian military is the institution that can hold the country together, move it forward. It is the only one," said Kamran Bokhari, an analyst at global intelligence firm STRATFOR.

"I don't see it relinquishing power to a very nascent, parliamentary system in which there is also a president."

He added: "There are material interests as an institution. Their privileged status, they want to be able to retain that.

"There are genuine national security concerns."

To achieve this, there are several models for Egypt to copy.

Close to home is Turkey, where the army was guardian of the secular constitution for decades and toppled governments when it saw that threatened. That role has been diluted with the rise of Prime Minister Tayyip Erdoğan's AK, a socially conservative party with Islamist roots and free market policies.

Further afield is Pakistan where Bokhari said there was an "unwritten rule that the top brass is involved in the decision-making or foreign policy-making process."

Egypt could forge its own formula. Bokhari said the army may want to insert a line in the constitution that it be consulted over national security, ensuring it a seat at the top table.

The army denies having any such ambitions.

"The job of the army is specified by the current constitution and if this is to change it will be through the parliament after studies and based on the demands of the people," one military official told Reuters.

"But so far nothing is planned to increase the powers of the army or give it new ones," said the official, who responded to questions only on condition of anonymity.

However, Mamdouh Shaheen, a general on the military council who deals with legislative and constitutional affairs, said in comments published in May that a new constitution should give the military a special place -- "some kind of insurance, so that it is not under the whim of a president."

He also said parliament should not be allowed to question the armed forces, the newspaper reported.

Such talk has riled commentators. Writing in the same newspaper after Shaheen, Amr el-Shobaki, a columnist, dismissed the idea that army should have any "special immunity" -- although he said that it should have a role in protecting Egypt's democracy.

For now, the generals are in the public eye but the institution is not submitted to public scrutiny. Just as it was under Mubarak, the military budget is a mystery and it controls a sprawling business empire -- just how big is unclear.

One Western diplomat, asked about the scale of the army's business interests compared to the overall economy, said: "Estimates vary wildly, even as much as 40 percent, which I think is way off the mark. We just don't know."

Some suggest a more realistic estimate is 10-15 percent.

WINNING OVER THE PUBLIC

The army runs factories that make plastic products and other goods. The highway connecting Cairo with the Red Sea port of Ain Sokhna was built by army engineers and the toll ticket for that road has the words "Ministry of Defence" stamped on it.

To win over the public before one big protest after Mubarak was ousted, the army issued a four-page insert in a newspaper outlining its economic contribution. It listed pharmaceutical firms it owned, stadiums it built and farmland it had reclaimed.

For many in Egypt, a country of 80 million people where about two-thirds of the nation were born during Mubarak's rule and knew no other leader, the army's presence gives reassurance.

"We have at least three years to get back on our feet and we need to have a strong and strict establishment in power, like the armed forces, to help us achieve that," said Saeed Saeed, in his 40s, who works at a private company.

The army has been revered by many Egyptians for its role in wars fighting former colonial powers Britain and France in the 1956 Suez crisis and Israel, notably in the 1973 war that led to peace talks and the return of the Sinai peninsula.

The army was virtually the only institution of state to survive this year's political turmoil intact. For investors, it provides confidence as the country rebuilds.

"For continuity and to provide an element of security, then having a state institution that functions efficiently is important," said Angus Blair of Beltone Financial, adding that there needed to be an "evolution in other institutions."

But there are many Egyptians who have become uncomfortable with what they see as the army's clumsy handling of government.

"I am getting a feeling that the army is not fulfilling the demands of the protesters ... and I don't like that because I agree with the revolution and all its demands," said Mohamed Afan, an accountant.

An army-backed ban on strikes by workers drew the wrath of protesters, who accused the army of betraying their trust. There have been no obvious cases where the law was implemented.

Egyptians have rallied over what they say is the army's tardiness in holding Mubarak to account. His trial on murder and graft charges is now set for August 3. The military insists this is a judicial matter, beyond its control.

Seeking to appease the public, generals have appeared on TV chat shows, unheard of in Mubarak's time, to explain themselves.

Field Marshal Mohamed Hussein Tantawi, the head of the Supreme Council of the Armed Forces Egypt, once served as defence attache in Pakistan and seems to have long been aware of the pitfalls of military rule.

The U.S. ambassador wrote in a leaked 2009 cable of a remark Tantawi had made then in which he concluded that "any country where the military became engaged in 'internal affairs' was 'doomed to have lots of problems'."