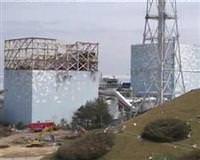 Support for nuclear energy has plummeted following the Japanese earthquake and tsunami that crippled the Fukushima power plant with 62 percent of people around the globe opposed to it.

Nuclear energy now lags behind solar, wind, and hydroelectric power, natural gas and coal as a preferred energy source with critics strongest in Germany, Italy and Mexico, according to a new Ipsos/Reuters poll released on Wednesday.

The survey of nearly 19,000 people in 24 countries also showed that nearly three-quarters of people think nuclear energy is only a limited and soon obsolete form of energy.

"Clearly, the Fukushima disaster had a massive impact on world citizens," said Henri Wallard, deputy chief executive officer at Ipsos. "Virtually everyone had heard about this and it had a big impact in terms of diminishing the support for nuclear energy."

Ninety five percent of people around the globe were aware of the accident at the Fukushima plant in March, having seen news coverage or pictures, which sparked a 26 percent jump in new opponents to nuclear power.

And nearly 70 percent of people questioned said they believe all nuclear plants are vulnerable to unforeseen events.

But surprisingly in Japan, 45 percent of people still view nuclear power as a viable energy option and 71 percent support its modernization.

"The Japanese people still show some realism," said Wallard "They believe they will continue to use nuclear energy in the energy mix for some time."

Support for nuclear power was strongest in India, Poland and the United States where the majority of people supported it.

Thirty eight percent of people overall said they agree with the modernization of electricity production via nuclear power.

In addition to losing confidence in nuclear power, 45 percent of people questioned admitted they are avoiding at least one product exported from Japan including fish, seaweed, fruit, rice and noodles because of the Fukushima accident.

Overall, slightly more than half of people said they thought Japanese officials' communications about the Fukushima disaster were honest and timely, but reactions varied from a low of 17 percent in South Korea to a high of 90 percent in India.

In Japan only 28 percent of people thought official news about the accident was conveyed honestly and even fewer thought it was timely.

"The Japanese people are quite critical in terms of the honesty and timeliness of the communication," said Wallard.