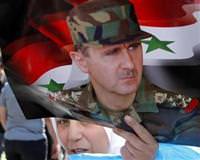 Syria on Wednesday scorned the European Union's criticism of Damascus over its violent crackdown on popular unrest, saying this showed Europe wanted to sow chaos in the country.

Foreign Minister Walid al-Moualem said he was confident that despite mounting international pressure on Syria, three months into an uprising against the Assad family's 41-year rule, there would be no foreign military intervention in his country, nor a no-fly zone of the kind NATO has imposed over Libya.

"The reactions from European Union officials to President Assad's speech (show) they have a plan and they want to continue with it, (they want) to plant strife and chaos in Syria," Moualem told a news conference in Damascus.

"Stop intervening in Syria's affairs, do not stir chaos nor strife, the Syrian people ... are capable of making their own future away from you ... Any external intervention is rejected."

EU states reached a political agreement on Wednesday to extend sanctions against Syria to four military-linked entities and seven individuals, including three Iranians, linked to suppression of dissent.

"There is a political agreement on extending the list," an EU diplomat said, adding that the new sanctions would take effect on Friday, once all 27 EU states have written on Thursday to give their formal approval.

Moualem warned that Syria would turn to other regions for trade and support.

"We will forget that Europe is on the map, and we will turn to the east, to the south and all directions that extend a hand to Syria. The world is not only Europe. Syria will remain steadfast," he told a news conference in Damascus.

Before the uprising, Western countries had been re-cultivating relations with Damascus after a period in which they isolated it to try to weaken its strategic alliance with Iran.

Reuters monitored the televised broadcast from outside the country, since Syria has expelled its correspondents.

In a speech on Monday, only his third since the outbreak of protests in which rights groups say 1,300 civilians have been killed, Assad promised reforms and called for national dialogue.

Many Syrians and world leaders dismissed his pledges as stale and inadequate. Violence continued on Tuesday with the killing of seven people by gunmen in two cities during rival protests by Assad loyalists and opponents, an opposition activist said.

Moualem said his country would not accept demands from "outside Syria" and blamed American sanctions in 2003 for the delay in reforms in Syria.

He urged Turkey, once a close ally but now an increasingly vocal critic of Assad, to reconsider its frosty response to his speech and said Syria wanted the "best relations with Turkey."

Syria's ambassador to Turkey, Nidal Kabalan, said on Wednesday Turkey-Syria ties were a "strategic relationship" for both countries and for the whole region, but added Damascus expected a more "even-handed approach" from its neighbor.

"We believe that some of the statements that have been voiced were a little bit too strong," Kabalan told Reuters.

"Those (protesters) are Islamic fundamentalists, al Qaeda-types, who have their own agenda and foreign affiliations and programs. We have seen what they have done in Afghanistan, in Iraq and in some other Gulf countries," he said.

Residents and activists said hundreds of Syrians were arrested since Tuesday despite Assad's announcement of a general amnesty, the second in three weeks.

The arrests concentrated on the coast, the city of Homs and the eastern province of Deir al-Zor, which borders Iraq's Sunni Muslim heartland. Tens of students were also beaten and arrested overnight at Damascus University dormitories, the Syrian Observatory for Human Rights said.

"The human rights situation in Syria is becoming even worse, with security forces and gangs increasingly attacking neighborhoods and more arbitrary arrests of Syrian citizens," the Observatory said in a statement.

After Assad's first amnesty, authorities freed hundreds of political prisoners but rights groups have not reported any releases after the second amnesty.

Rights groups say Syria has more than 14,000 political prisoners. Around 10,000 have been arrested during the uprising. Hundreds have gone missing after seen last being taken by secret police.

Authorities say more than 200 police and security forces have been killed by armed gangs.

Syria, a country of 20 million, has a Sunni majority, and the protests demanding political freedoms and the departure from power of the Assad family, which belongs to the Alawite sect, have been biggest in mostly Sunni rural areas and towns and cities, as opposed to mixed areas.

Fears are growing that Syria, a mosaic of Alawites, Sunnis, Christians, Kurds, Druzes and other groups, could implode into sectarian savagery similar to the conflict that ripped through Iraq after Saddam's ousting.

Syria, which borders Israel, Lebanon, Iraq, Turkey and Jordan, also exerts regional influence because of its alliance with Iran and its continued role in Lebanon, despite ending a 29-year military presence there in 2005.

It also has an influence in Iraq.

The new sanctions list was drawn up by Britain and France the brought the total number of individuals and entities targeted by EU sanctions on Syria to 34.

The EU diplomat said the Iranians were involved in providing equipment and technical support to help Syrian authorities suppress dissent.

Moualem denied that Iran or its Lebanese ally Hezbollah had intervened to confront Syrian protesters, and said that the killings of some police and soldiers indicated that Islamist group al Qaeda might be behind some of the violence.

"I cannot hide (the fact) that some of the practices that we have seen in the killings of security personnel gives an indication that these acts were carried out by al Qaeda," he said, without elaborating.

In May, the European Union added Assad and other senior officials to a list of those banned from traveling to the EU and subject to asset freezes.