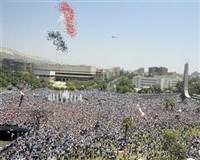 Syrian troops have deployed on a main road leading from the commercial hub of Aleppo to Turkey as protests expand to border regions, residents said, while Ankara grows increasingly critical of President Bashar al-Assad's military crackdown.

On the 100th day of an uprising against Assad's autocratic rule, soldiers and secret police backed by armored vehicles set up road blocks on Wednesday along the road, a major route for container traffic from Europe to the Middle East, and arrested tens of people in the Heitan area north of Aleppo, Syria's second city, residents said.

The armored personnel carriers reached the area of Deir al-Jamal, 25 km (15 miles) from the Turkish border, they added.

"The regime is trying to pre-empt unrest in Aleppo by cutting off logistics with Turkey. A lot of people here use Turkish mobile phone networks to escape Syrian spying on their calls and have family links with Turkey, there are also many old smuggling routes that people could use to flee," one of the residents, a physician, told Reuters by telephone.

Northern regions bordering Turkey have seen growing protests demanding political freedoms and an end to 41 years of Assad family rule, following military assaults on towns and villages in the Jisr al-Shughour region of Idlib province to the west of Aleppo that have sent over 10,000 refugees fleeing to Turkey.

Central neighborhoods of Aleppo, a largely Sunni city with a significant minority population, has been largely free of protest, in part due to a heavy security presence and a continuing alliance between Sunni business families and Syria's ruling Alawite hierarchy.

But activists said security forces killed one protester in Aleppo on Friday and arrested 218 students at Aleppo University, scene of now daily protests, in the last three days.

In Idlib, rights groups say Syrian security forces have killed more than 130 civilians and arrested 2,000 in a scorched earth campaign to crush dissent in the province.

The United Nations High Commissioner for refugees said that since June 7, some 500-1,500 people have fled across Syria's 840 km (520 mile) border with Turkey daily.

A country of 20 million, Syria is largely Sunni, and the protests have been biggest in mostly Sunni rural areas and towns and cities, as opposed to mixed areas.

However, analysts say the risks are high that Syria, an ally of Iran and Lebanon's Shi'ite Hezbollah guerrillas and with a sectarian mix of Sunni, Kurdish, Alawite and Christians, could slip into war.

Sunni Turkey has also become increasingly critical of the Syrian president, after previously backing him in his drive to seek peace with Israel and improve relations with the United States, while Assad opened the Syrian market to Turkish goods.

Turkey had warned Assad against repeating mass killings in cities witnessed during the rule of his father in the 1980s. A senior Turkish official said on Sunday that Assad had less than a week to start implementing long-promised political reforms before foreign intervention began, without elaborating.

Syria's Foreign Minister Walid al-Moualem on Wednesday played down any possibility of international intervention against his country. He asked Turkey to reconsider its response to a speech this week by Assad in which Turkish President Abdullah Gul said Assad's promises of reforms were not enough.

In his third speech since the start of the uprising, in which rights groups say 1,300 civilians have been killed, Assad promised reforms but these were seen by opponents and world leaders as too little, too late and too vague.

Political prisoners, who were not included in the amnesty rioted at a jail in the northeastern province of Hasaka on Tuesday night after seeing criminals being set free. Police used teargas, live bullets and batons to control the prison, two residents of Hasaka said.