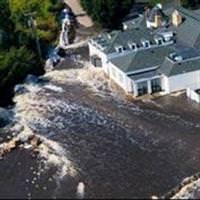 With thousands of homes in the path of the flood, displaced residents settled in for their second mandatory evacuation since just after Memorial Day with the prospect of potentially months in temporary housing.

Up to a quarter of the 41,000 residents of North Dakota's fourth largest city were forced out of their homes on Wednesday afternoon. Outside those areas on Friday morning, streets were deserted except for dump trunks moving material toward levees.

By Friday evening, the brownish river water had risen to more than four feet above historic 1969 flooding residents had used as a benchmark and topped the 1881 record by two feet.

"It's dangerous and we need you to stay away and do as little travel as possible within the community," Minot Mayor Curt Zimbelman told reporters.

Zimbelman said about 2,500 homes were flooded by Friday afternoon within the city, some to their eaves, and that number would grow to 4,000 to 5,000 homes by the evening.

Thousands more homes were flooded in areas outside Minot.

"The White House called me, they have told me they are committed to a full federal response," Senator Kent Conrad told reporters, adding that the North Dakota congressional delegation has urged federal officials to approve individual assistance for Minot and other communities across the state.

An enormous rush of water was expected to push the Souris, or Mouse, River levels at the Broadway Bridge in Minot as much as another four feet higher to a crest late on Saturday or early Sunday that would hold for three or four days.

Amtrak has suspended Empire Builder passenger train service in parts of Minnesota, North Dakota and eastern Montana due to the widespread flooding.

The massive flooding at Minot has overshadowed temporarily the widening deluge along the Missouri River that threatens cities from Montana through Missouri.

Federal officials have pushed record water releases from six reservoirs along the Upper Missouri River that are near capacity because of a deep melting snowpack and heavy rains.

Those reservoirs have little capacity for additional rain and record releases are expected to continue through August, causing widespread flooding in Nebraska, Iowa and Missouri.

Heavy rains across the Souris River Basin left Canadian reservoirs over capacity. Water then rushing down from Canada has forced U.S. officials to make record-large releases from the Lake Darling Dam above Minot and other communities.

Federal officials reduced slightly on Friday the amount of water they plan to release from Lake Darling Dam into the swollen river, saying that water flows from Canada had peaked at a key point near the U.S.-Canadian border.

The U.S. Army Corps of Engineers plans to hold releases at a maximum of 25,000 cubic feet per second from Lake Darling, down from 28,000 maximum, and hold that peak, Lieutenant Colonel Kendall Bergmann told reporters.

The permanent and temporary defenses at Minot were built to withstand about 9,500 cubic feet per second of water, which would have been a record rate had it held below there.

It will be some time until the water recedes and damage can be assessed. But state and local officials said the focus soon would shift to dealing with the toll on displaced residents.

"Even though we are still frantically fighting the flood and trying to keep the water away still as much as possible, we are very rapidly going to be into a period where we are dealing with the human impacts of this," North Dakota Governor Jack Dalrymple said.

Flood warnings have stretched from Burlington, northwest of Minot, through Logan and Sawyer to the southeast.

Minot and Burlington city officials on Thursday opted not to expand their mandatory evacuation zones after determining that in Minot, for example, the additional planned flows would increase the flooded area by a city block or two at most.

North Dakota National Guard soldiers enforced an expanded ban on residential traffic in parts of Minot on Friday and earth-moving equipment pressed toward downtown. The dirt and sand dusted streets and buildings with powder.

Some 326 residents stayed in Red Cross shelters at a city auditorium and Minot State University or the Minot Air Force Base Thursday night. Those numbers are expected to increase.

Many residents have moved in with friends or family and stored furniture from vacated homes at an area ice arena, temporary storage facilities and in garages across the city.

Minot State University English Professor Robert Kibler, forced from his home in Burlington, stayed Thursday night on a cot at the Red Cross shelter at the university's dome.

"The Souris is not a river you usually notice," said Kibler, a Washington D.C. native who moved to the Minot area 12 years ago. "It is not a boating river or for recreation."