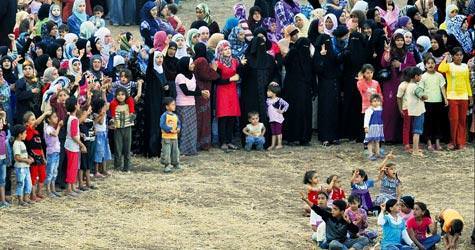 Syrian security forces shot dead at least 15 people on Friday after tens of thousands of protesters took to the streets demanding the overthrow of President Bashar al-Assad, witnesses and activists said.

"Tell the world Bashar is without legitimacy," shouted several thousand protesters in the Damascus suburb of Irbin, the chants audible in a phone call to a witness at the protest.

The Local Coordination Committees, a main activists' group, said it had the names of 14 civilians killed in the merchant city of Homs, the impoverished town of Kiswa south of Damascus and in the residential district of Barzeh in the capital.

Another protester was shot dead in the town of Qusair, a rights group said.

Syrian state television blamed the killings in Barzeh on armed men who authorities say are behind the violence in the three-month uprising, and said members of security forces were wounded. Syria has expelled most foreign journalists making it hard to verify witness accounts or official statements.

The state news agency Sana said tens of thousands rallied in Damascus governorate in support of the "comprehensive reform process" led by Assad. It also reported a pro-Assad event in the eastern governorate of Deir al-Zor. The agency carried pictures of crowds carrying Syrian flags and pictures of Assad.

In Barzeh, a resident who gave his name only as Hussam, told Reuters by telephone: "The security police first used teargas then they started shooting from rooftops when shouting against Assad continued. Three youths were killed and I saw two bodies shot in the head and the chest."

In the central cities of Homs and Hama, protesters shouted "the people want the downfall of the regime," while in Deraa, cradle of the uprising, people waved banners rejecting Assad's promise in a speech this week to launch a national dialogue.


Deraa protesters chanted slogans urging people in Damascus, which has seen fewer demonstrations than rural protest centres, to follow their lead. "People of Damascus, here in Deraa we toppled the regime," they chanted.

Protests also erupted in western coastal cities and eastern provinces near Iraq. Syrian troops swept to the northern border with Turkey on Thursday, prompting another 1,500 refugees to flee across the frontier into camps which Turkish officials say now host more than 11,000 refugees.

Syrian television said on Friday army units were "completing their deployment" in border villages. It said there had been no casualties during the operation and that soldiers were greeted with traditional welcomes of flowers and rice by residents.

Assad's repression of the protests, in which Syrian rights groups say more than 1,300 civilians have been killed, has triggered Western condemnation and a gradual escalation of U.S. and European Union economic sanctions against Syrian leaders.

On Friday the European Union announced extended sanctions against Syria, including against three commanders of Iran's Revolutionary Guard accused of helping Damascus curb dissent. Syria denies Iran has played any role in tackling the unrest.

Four Syrian officials were also targeted, bringing to 34 the number of individuals and entities on the list which already includes Assad and his top officials.

Despite strong rhetoric among against Assad from Western leaders, there has been no suggestion they plan to go beyond economic sanctions to tougher action such as the military intervention launched against Libyan leader Muammar Gaddafi.

WASHINGTON WORRIED
The United States, which has also imposed targeted sanctions on Syrian officials, said a reported Syrian army move to surround and target the town of Khirbat al-Joz just 500 metres (yards) from the Turkish border was a worrying development.

"Unless the Syrian forces immediately end their attacks and their provocations that are not only now affecting their own citizens but (raising) the potential of border clashes, then we're going to see an escalation of conflict in the area," U.S. Secretary of State Hillary Clinton said.

The crackdown has caused a crisis in Assad's once-warm relations with Turkey, which has become strongly critical.

Davutoglu, who said Erdogan would speak to Assad on Friday, talked to Syrian Foreign Minister Walid al-Moualem on Thursday and Ankara summoned the Syrian ambassador.

In an apparent easing of Ankara's criticism, Davutoglu said Assad's speech contained "positive elements in it as signals of reform," but said it was important that action followed.

At the border, only a few Syrian troops were visible on Friday, some occupying a building on a hill overlooking the border, directly across from the Turkish village of Guvecci.

Three Syrian soldiers were manning a sand-bagged machinegun post on top of a house in the Syrian border village of Khirbat al-Joz. Camps on the Syrian side of the border fence appeared deserted and no more refugees were crossing.

The United States has steadily sharpened its rhetoric toward Assad, saying he is losing credibility and must either implement promised reforms or get out of the way.
Protests have grown in northern areas following military assaults on towns and villages in the Jisr al-Shughour region of Idlib province, west of Aleppo, that sent more than 10,000 people fleeing across the 840-km (520-mile) border with Turkey.

Syrian television said hundreds of people were heading back to Jisr al-Shughour. A refugee who said he was at Yayladagi camp said on Thursday a delegation of notables from the city told people it was safe to go back, but that refugees told them there would be "no return until the fall of the (Assad) regime."

Syria, a mostly Sunni nation of 20 million with Kurdish, Alawite and Christian minorities, is vulnerable to sectarian tensions. Assad belongs to the Alawite sect, an offshoot of Shi'ite Islam, and his opponents say he increasingly relies on loyalist Alawite troops and irregulars known as 'shabbiha'.