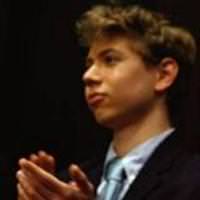 An Israeli newspaper reported on Friday that one of Prime Minister Benjamin Netanyahu's sons had posted anti-Islamic remarks on his Facebook page.

An Israeli newspaper reported on Friday that one of Prime Minister Benjamin Netanyahu's sons had posted anti-Islamic remarks on his Facebook page.

"Terror has a religion and it is Islam," the Haaretz newspaper said Yair Netanyahu, who is also a soldier in the Israeli army, wrote after a Jewish family was killed in March in the occupied West Bank.

Two Palestinian men were later charged with killing the young couple and their three children.

Haaretz said the posts were deleted after it inquired about them and were no longer visible on Yair Netanyahu's page.

David Shimron, a lawyer for the Netanyahu family, did not deny the report but called it a "ridiculous and cynical use of a teenager's comments."

Shimron also said the younger Netanyahu had "expressed himself in an informal virtual forum" and that he "respects all people and is ready to live in peace in Israel with people of all identities."

Amongst other comments Netanyahu was said to have posted were that Palestinians "have no land, this is part of Israel, never in history was there a Palestinian state."

He also said that "not all Muslims are terrorists, but all terrorists are Muslims."

The Israeli prime minister has himself embraced social media and often uses a dedicated page in Facebook and on Youtube to get his political messages across.