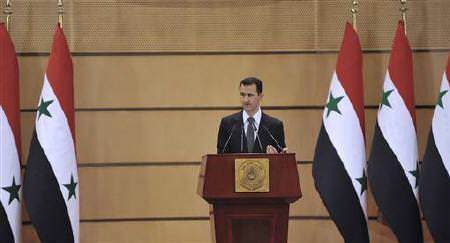 Turkey faces a growing danger Syrian economic and social disruption could spill onto its soil, with some fearing an influx of refugees could draw its troops into border operations uncomfortably close to Syrian forces.

President Bashar al-Assad's crackdown on opposition has pushed once-warm ties with Syria close to breaking point. Assad's increasingly bloody repression of protests has driven 12,000 Syrian refugees to move north and take shelter in camps in Turkey, while Syrian troops move up to seal the area.

Ankara has sharpened its rhetoric against Damascus -- publicly nudging Assad to pass reforms and calling his crackdown "savagery" -- but analysts say Turkey is still holding out hope for a change of heart in Assad.

Turkish Foreign Minister Ahmet Davutoglu said on Friday a speech by Assad contained "positive elements in it as signals of reform", but said it was important that action followed.

"The Turks seem to be quite worried about a lack of alternatives to a stable regime other than a cruel tyrannical succession," said a Western diplomat with knowledge of the Turkish perspective.

"Their last best hope -- although they are not naive -- is that somehow Assad, out of desperation to save his own skin, will undertake meaningful reforms."

Syria, an ally of Iran, sits at the heart of numerous conflicts in the Middle East. An unstable Syria would have repercussions for Turkey, which also borders Iran and Iraq.

"The fear of the unknown is a major factor," said Gareth Jenkins, an Istanbul-based security analyst.

"AK is very conservative. It prefers to deal with the devil it knows and Assad is the devil it knows," Jenkins said, referring to Prime Minister Tayyip Erdogan's ruling AK Party, which has improved ties with Syria and other Muslim countries.

But Turkey could decide to ditch Assad should Syria descend into a civil war between religious and ethnic groupings.

Though non-Arab, Turkey's demographics have similarities with Syria's. Both have a Sunni majority with Kurdish and Alawite minorities, although Assad's ruling family are Alawites.

"The strategic, political dimension says that the stability of Syria is vital for the fragile stability of the Middle East," Murat Yetkin, editor of the Hurriyet daily, wrote recently.

"But that doesn't mean that the current regime will be supported at any cost, because the Baath rule cannot produce stability anymore, as it insists on the current policies."

With refugees pouring across the border, media have reported that Turkish political and military leaders are considering setting up a buffer zone inside Syria in case the number of refugees increases sharply.

Officials say they are not aware of such plans.

Turkey's 2nd Army Commander visited the Guvecci border post this week to take stock of Syrian troop deployments near the border and to see the situation of the refugees for himself.

Turkey was caught off guard when 500,000 people flooded across the border from Iraq during the 1991 Gulf War, many of them staying for some time after the war. The years that followed saw small contingents of Turkish troops policing what was an effective 'buffer zone' in the north of Iraq.

Having almost gone to war in the late 1990s because of Turkish Kurdish militants using Syria as a sanctuary, Damascus would not welcome the prospect of Turkish boots on Syrian soil.

Ankara still faces an insurrection by Kurdish militants seeking their own state in the south-east. Turkey is eager to see borders with Syria, Iran and Iraq that, while open to commerce, are well sealed against rebel infiltration.

Jenkins said creating a buffer zone in Syria would carry risks given concerns of Turkish "neo-Ottoman" foreign ambitions in some Arab countries, but said Ankara might be forced to it in the case of a mass influx of refugees.

"If we start seeing a spillover that upsets the internal demographic dynamics of Turkey a buffer zone would be possible. The Kurds are the elephant in the room here," he said.

While Turkey has failed to use its economic leverage to force a change in Damascus -- Turkey is Syria's largest trading partner -- it is manoeuvring to adapt to any fallout.

A few months ago, Turkey and Syria were holding joint cabinet meetings and military exercises and abolished visa requirements. Earlier this month, Turkey hosted a conference of Syrian opposition figures in the city of Antalya, and members of the outlawed Syrian Muslim Brotherhood operate out of Turkey.

Meanwhile, there have also been early signs of a thaw in frosty relations between Turkey and Israel, Syria's enemy.

"The policy of warming up to Syria has collapsed, but rather than Turkey reaching a point in which its patience with Assad will snap we will see Turkey finding new margins of manoeuvre to whatever situation emerges," said Semih Idiz, a foreign policy expert for Milliyet daily.

The Syrian crisis has also pushed Ankara and Washington into closer cooperation after falling out of step over Iran.

Erdogan, who once vacationed together with Assad, and U.S. President Barack Obama have discussed Syria twice by phone recently and share a need for Damascus to implement reforms.

Assad's repression has triggered a gradual escalation of U.S. and European Union economic sanctions against Syrian leaders, but Turks don't agree on sanctions.

"Turks hate sanctions. Turks suffered greatly under generations of sanctions in Saddam's Iraq and now with Iran. The last thing Turkey wants is a third country on its eastern border under international sanctions," the Western diplomat said.

"They likely would not hesitate to point out to Assad the examples of Saddam and Iran, if he persists in oppressing his own people and defying world opinion."