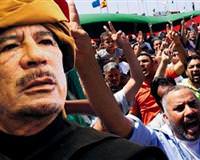 The International Criminal Court issued an arrest warrant on Monday for Libyan leader Muammar Gaddafi, and rebels trying to oust him said their forces had advanced to within 80 km (50 miles) of the capital.

The Hague-based court approved warrants for Gaddafi, his son Saif al-Islam and Libyan intelligence chief Abdullah al-Senussi on charges of crimes against humanity. ICC prosecutors allege they were involved in the killing of civilian protesters who rose up in February against Gaddafi's 41-year rule.

"To prevent them covering up ongoing crimes and committing new crimes, they should be arrested. This is the only way to protect civilians in Libya," said ICC prosecutor Luis Moreno-Ocampo, who had sought the arrest warrants.

Reading out the warrant at the court in The Hague, presiding judge Sanji Mmasenono Monageng said Saif al-Islam Gaddafi was accused of having "conceived and orchestrated a plan to deter and quell by all means the civilian demonstrations". Senussi was accused of using his position to have attacks carried out.

However the warrant is unlikely to lead to Gaddafi's arrest as long he remains in power and inside Libya, because the court does not have the power to enforce its warrants.

"Libya ... does not accept the decisions of the ICC which is a tool of the Western world to prosecute leaders in the Third World," Justice Minister Mohammed al-Qamoodi said.

"The leader of the revolution and his son do not hold any official position in the Libyan government and therefore they have no connection to the claims of the ICC against them," Qamoodi told a Tripoli news conference.

Gaddafi's government says he holds no formal post despite ruling for 41 years. The administration has denied targeting civilians, saying it has taken justified military action against armed criminal gangs and al Qaeda militants.

Celebrations erupted in the rebel-held city of Benghazi, in eastern Libya, after the ICC's decision. Insurgent officials said the move meant negotiations with Gaddafi were impossible.

"After this warrant, it is all irrelevant. We cannot negotiate with war criminals," Jalal al-Galal, spokesman of the rebel National Transitional Council (NTC) told Reuters.

The move also was welcomed by NATO and alliance members.

"It's another indication that Muammar Gaddafi has lost his legitimacy," White House spokesman Jay Carney said.

In a separate blow to the Gaddafi family, Western diplomats said a U.N. Security Council sanctions committee had banned Gaddafi's wife from traveling outside Libya.

Although Gaddafi and other members of his family have been on a U.N. blacklist since February, Russia had blocked the inclusion of Gaddafi's wife Safia on the list of individuals facing a travel ban and asset freeze until last week.

Anti-Gaddafi rebels, based in the Western Mountains region southwest of Tripoli, made their biggest breakthrough in weeks to reach the town of Bir al-Ghanam, where they are now fighting pro-Gaddafi forces for control, their spokesman said.

The move took them 30 km (18 miles) north of their previous position and closer to Tripoli, Gaddafi's main power base.

"There were battles there most of yesterday," Juma Ibrahim, a rebel spokesman, said by telephone.

"Some of our fighters were martyred and they (government forces) also suffered casualties and we captured equipment and vehicles. It's quiet there today and the rebels are still in their positions," he said from the nearby town of Zintan.

The rebels have been battling Gaddafi's forces since late February, when thousands of people rebelled, prompting a fierce crackdown by Gaddafi's security forces.

The revolt has turned into the bloodiest of the Arab Spring uprisings against autocratic rulers across the Middle East.

In Nalut district by the Tunisian border, rebels said power and water infrastructure had been hit by pro-Gaddafi bombing.

"There is a crisis here," a spokesman, identified as Mohammed, said. "We are without electricity after the brigades hit high-voltage electricity posts ... and the power problem affected water supplies."

A Reuters reporter in the center of Tripoli heard at least two loud explosions on Monday coming from the direction of Gaddafi's Bab al-Aziziyah compound, repeatedly targeted by NATO.

Later, government officials took reporters to the compound. They showed them a burned-out bus which, they said, belonged to Gaddafi and had been hit by two NATO missiles.

Gaddafi is the second sitting head of state to have an ICC arrest warrant issued against him. One was issued previously for Sudanese President Omar al-Bashir.

Securing arrests, however, has proven difficult for the ICC, which has no police force and relies on member states to enforce arrest orders. Some states have refused to arrest Bashir, who is still able to travel to friendly states.

Mohammed al-Alagi, justice minister for the Libyan rebels, told reporters in The Hague that, depending events, they might opt to prosecute Gaddafi in Libya.

Some military officials within NATO have been warning for weeks that alliance resources are being stretched thin by a bombing campaign that has so far failed to dislodge Gaddafi.

Germany's Spiegel Online cited government sources as saying Berlin had agreed to a request to supply NATO with bomb components, the latest indication of the strain on alliance munitions supplies from its three-month bombing campaign.

Germany broke ranks with NATO allies to abstain in the United Nations vote allowing military action and has not participated in the campaign. France and Britain, which have carried out most of the bombing, have been given U.S. bombs.

A German defense ministry spokesman said a request for supplies came from the NATO Maintenance and Supply Agency, but declined to give details. "The general willingness to provide support was signaled," he said.

In neighboring Tunisia, three Libyan ministers, including the foreign minister, were holding talks with "foreign parties," the Tunisian state news agency reported, in a possible sign some in Gaddafi's circle were seeking a settlement.

U.S. State Department spokeswoman Victoria Nuland said Washington could not confirm the talks were taking place but said any discussions must focus on Gadaffi's departure.

"He's got to end the violence, he's got to pull back and he's got to step down from power. So if that's the tenor of the conversation, we'd be interested to hear about it," Nuland said.