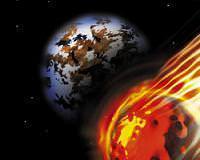 An asteroid with an estimated girth as large as a garbage truck soared within 7,500 miles of the Earth on Monday as it passed harmlessly over the Atlantic Ocean, according to NASA's Jet Propulsion Laboratory.

The space rock, measuring 5 to 20 meters in diameter, followed the same near-Earth path that scientists had earlier predicted, looping around the planet in a boomerang-shaped trajectory, JPL spokesman D.C. Agle said.

Its nearest approach to Earth, about 7,500 miles, was 30 times farther away than the International Space Station, which orbits the planet at a distance of 250 miles.

On a more celestial scale, the asteroid's closest distance to Earth was just 3 percent of the 250,000 miles separating the Earth from the moon.

An object about the same size as Monday's near-Earth asteroid, designated by scientists as 2011 MD, zips past the planet at about the same distance ever six years, according to JPL.

Even if an asteroid the size of 2011 MD ever entered the Earth's atmosphere, it would likely burn up and cause no damage to the planet, JPL said.