Case against Strauss-Kahn near collapse 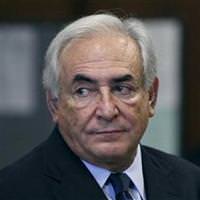 The sexual assault case against former IMF chief Dominique Strauss-Kahn was near collapse, sources said on Thursday, raising the prospect of his dramatic return to France's presidential election race.

Strauss-Kahn, 62, was a steward of the world economy and a leading candidate for the French presidency when he was arrested on May 14 and charged with assaulting a hotel maid in New York.

The arrest forced Strauss-Kahn's resignation from the International Monetary Fund and appeared to end his presidential ambitions, but his political career could be revived if prosecutors drop their case against him.

In a dramatic turnabout, a source familiar with the case said on Thursday night that prosecutors now had doubts about the maid's credibility as a witness.

"The credibility is in question," the source, speaking on condition of anonymity, told Reuters.

From the start, the case hinged on the purported victim, a 32-year-old Guinean immigrant who cleaned the $3,000-a-night suite at the Sofitel hotel in Manhattan where Strauss-Kahn was staying.

Police and prosecutors initially trumpeted her credibility, confident in the women's story that the former IMF chief emerged naked from the bathroom, chased her down the hall and forced her to perform oral sex on him. Evidence showed that semen was found on the collar of her maid's uniform, a source close to the investigation said.

But defense lawyers challenged the claim of a violent assault, suggesting a defense built on consensual sex.

Another source close to the case said that the district attorney's office took the case to a grand jury without fully checking out the woman's bona fides.

"Just about everything that was reported on this woman early on was untrue but no one checked or wanted to believe anything else," the source told Reuters.

The New York Times reported that prosecutors met with Strauss-Kahn's lawyers on Thursday and the parties were discussing whether to dismiss the felony charges.

It said Strauss-Kahn could be released on his own recognizance and freed from house arrest.

Strauss-Kahn was due back to court in New York on Friday to seek changes to his bail conditions, defense attorney Benjamin Brafman said.

Strauss-Kahn resigned from the IMF on May 19 and pleaded not guilty on June 6, vehemently denying the allegations. He faces up to 25 years in prison if convicted.

With his resignation, Strauss-Kahn severed all his ties to the IMF. Christine Lagarde, who just stepped down as French finance minister, takes over the top IMF job on Tuesday.

His arrest prompted a national French discussion on gender equality and the tradition of overlooking the private sexual behavior of men in power.

After his arrest, Strauss-Kahn was displayed handcuffed before cameras in a "perp walk" that drew outrage in France, where the American tradition was viewed as slightly barbaric. Some commentators suggested that Strauss-Kahn, known as the "great seducer" of French politics, could have been set up by opponents.

"This is amazing news for Dominique, for (his wife and former television journalist) Anne Sinclair, for his family. I think they must have the impression this morning that they are waking up from a terrible nightmare," French socialist member of parliament Jean-Marie Le Guen, who is close to Strauss-Kahn, told French television Friday morning.

"All those who believed in Dominque's innocence, and in the fact that the elements as they were reported were incompatible with his personality, will feel vindicated," he said.

The New York Times quoted what it said were two well-placed law enforcement officials as saying prosecutors had discovered issues involving the asylum application of the accuser and possible links to criminal activities, including drug dealing and money laundering.

The paper added that prosecutors had discovered that the woman had had a phone conversation with an incarcerated man within a day of her encounter with Strauss-Kahn in which she discussed the possible benefits of pursuing the charges against him. The conversation was recorded.

It added that the man was among a number of individuals who had made multiple cash deposits, totaling around $100,000, into the woman's bank account over the last two years.

After a few nights in New York's notorious Rikers Island jail, Strauss-Kahn was allowed to post $1 million cash bail and a $5 million bond. He is now under house arrest in Manhattan, equipped with an electronic monitoring device and under the 24-hour watch of armed guards.