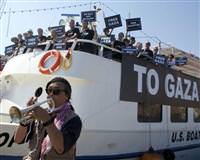 Irish pro-Palestinian activists accused Israel on Thursday of sabotaging their boat while it was docked in Turkey to stop it joining an international flotilla bound for the Palestinian enclave of Gaza.

The crew of the MV Saoirse realised there was something wrong with the propeller shaft when they took the vessel for refuelling at Göcek on Turkey's southwest coast on Monday. Activists said a marine engineer who inspected the damaged boat in dry dock declared that it had been sabotaged.

"It's identical to the damage to the Swedish boat and you don't need to be Sherlock Holmes to figure out who is behind this," Paul Hogan, a former Irish rugby international who was among the activists, told Irish state broadcaster RTE.

"Israel has made statements saying that this flotilla will be stopped."

The flotilla, which is now down to nine vessels from some 15 planned earlier, hopes to set out over the weekend in an attempt to run an Israeli naval blockade to take relief supplies to Gaza, home to 1.5 million Palestinians.

The challenge to the Israeli blockade comes a little over a year after Israeli marines stormed the Mavi Marmara ship, the main vessel in a six-strong convoy, and killed nine activists, after an initial boarding party was attack with bats and knives.

Gaza is controlled by Hamas, which calls for the destruction of Israel and is regarded as a terrorist group by Western powers, including the United States and the European Union. Israel says it blockades Gaza to stop the import of arms.

Twenty Irish activists had expected to make the voyage to Gaza on the Saoirse, but only six would be able to go due to a lack of room on other vessels in the flotilla.

Paul Murphy, a socialist member of the European Parliament who was among them, called on the Irish government to expel the Israeli ambassador to Dublin.

"The evidence pointing towards the Israeli state being guilty is overwhelming," Murphy said in a statement.

"It cannot be a coincidence that two of the boats destined to sail to Gaza have now been sabotaged in the same way, with their propeller shafts damaged."

Asked to comment on the allegation, Mark Regev, spokesman for Israeli Prime Minister Benjamin Netanyahu, said: "These activists are not known for their objectivity. Some people blame Israel for every calamity. But obviously that cannot be true."

The Mavi Marmara was pulled out of the flotilla by the Islamic charity organising the Turkish contingent earlier this month, as it lacked documents needed to put to sea due to damage sustained last year.

The United Nations has asked governments to persuade the activists to abandon their plans and Netanyahu thanked it, Greece and the United States for their efforts during a speech at an Israeli air force cadets' graduation ceremony.

He reiterated that Israel had what he called a "total right to act against attempts to legitimise the smuggling of missiles and rockets and other weapons to the Hamas terror enclave," citing attacks launched against Israeli civilians.

Despite the delays in setting out, an Israel-based journalist on board a U.S. vessel of the flotilla docked in Greece reported on Thursday on the microblogging website Twitter its passengers were on board and "waiting for it to set sail".

Israeli Defence Minister Ehud Barak said on Wednesday his troops were readying for all eventualities.

"I am sure the (military) is better prepared than in the past. This is not a sea cadet ride or a pleasure cruise and in any event we must be ready for all scenarios ... The working assumption for the forces is that they could meet very violent resistance," Barak told Israel's Channel 2 television.