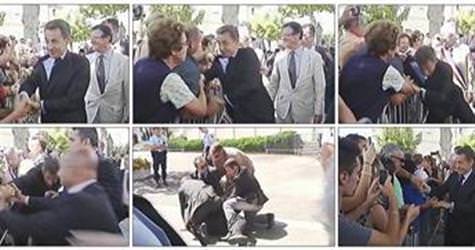 French President Nicolas Sarkozy was involved in a scuffle during a handshake tour Thursday when a man grabbed him by the shoulder and tried to pull him over a crowd barrier.

Sarkozy, attending a meeting of mayors near the southern city of Toulouse, was moving down a line of residents and shaking hands when an unidentified man seized the fabric of his suit at the shoulder and yanked him aggressively.

In footage shown on several French news channels, body guards pulled the man back from the crowd and pinned him to the ground as Sarkozy, visibly shaken, looked on.

Sarkozy, up for a reelection battle in 10 months, was involved in several verbal altercations in the first years of his presidency, including one incident during a walkabout when he told a man to "p*** off, loser."