Syria running out of time to reform, Clinton says 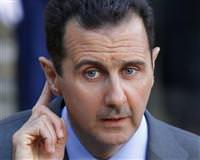 Syria is running out of time to reform and will face more organized resistance if it does not, Secretary of State Hillary Clinton said on Friday.

Speaking at a news conference in Lithuania, she also said she was disheartened by reports of fresh violence in recent days and that the Syrian government's decision to allow one opposition meeting in Damascus was not sufficient.

Asked about the apparent contradiction between permitting the meeting while pursuing a tank offensive in the north, Clinton said: "It doesn't appear that there's a coherent and consistent message coming from Syria.

"They must begin a genuine transition to democracy and allowing one meeting of the opposition in Damascus is not sufficient action toward achieving that goal," Clinton, standing beside Lithuanian President Dalia Grybauskaite, told reporters.

"So I am disheartened by the recent reports of continued violence on the borders and in Aleppo, where demonstrators have been beaten, attacked with knives by government-organized groups and security forces," she said.

"It is absolutely clear that the Syrian government is running out of time. They are either going to allow a serious political process that will include peaceful protests to take place throughout Syria and engage in a productive dialogue with members of the opposition and civil society, or they're going to continue to see increasingly organized resistance."

Clinton added: "We regret the loss of life and we regret the violence, but this choice is up to the Syrian government. And, right now, we're looking for action not words and we haven't seen enough of that."

Rights campaigners say Syrian security forces and gunmen loyal to President Bashar al-Assad have killed over 1,300 civilians since an uprising for political freedoms erupted in March. The toll, they say, includes over 150 people killed in a scorched earth campaign against some restive towns and villages.