Venezuela's Chavez says he was treated for cancer 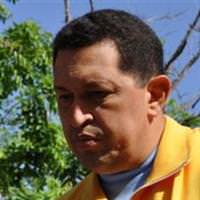 Venezuela's flamboyant socialist leader Hugo Chavez said on Thursday he had surgery to remove a cancerous tumor, presenting a serious challenge to his near-total dominance of the South American OPEC nation since 1999.

The announcement from Cuba confirmed rumors swirling for nearly three weeks but still stunned Venezuelans ahead of what was already looking like a tight race for a presidential election next year.

Speaking from Havana where he underwent surgery on June 10, a pale and emotional Chavez gave no indication when he would return to Venezuela. Nor did he name a temporary substitute to lead the polarized nation of 29 million people.

"They confirmed the existence of a tumorous abscess, with the presence of cancerous cells, which needed another operation to extract the tumor completely," he said in his first address to the nation since his surgery.

Chavez, 56, said he was receiving "complementary treatments to combat different types of cells that were found" -- possibly implying chemotherapy.

"I deeply appreciate the demonstrations of solidarity by Venezuelans and other brotherly people," he added, standing at a lectern by a Venezuelan flag and a painting of his inspiration, South American independence hero Simon Bolivar.

Analysts say a prolonged absence could trigger infighting among his allies -- none of whom possess Chavez's charisma or national appeal -- and possibly prompt calls for an early election by opposition parties gearing up for a 2012 poll.

"It is impossible to deduce if he will or will not be in a physical state and the right mood to go into the 2012 campaign," said local analyst Luis-Vicente Leon said.

During his 12-year rule, Chavez alienated many for nationalizing large swathes of the economy and showing an authoritarian streak both in his stranglehold on government and his tough treatment of political opponents.

He has, though, won support from the poor for channeling oil revenues into social projects like free shanty-town health clinics, and has won almost every election his government has fought, undermining the argument of foes who call him a dictator.

In contrast to his usual jocular and improvisational style, Chavez read a statement while frequently looking down at notes. He looked serious but not weak or debilitated.

He recognized, maybe for the first time since taking office, that his health had been compromised by his leadership style, based on intense micro-management, constant coffee-swilling and little sleep.

"Throughout my life I've been committing fundamental errors ... of not taking care of my health and being reluctant about medical treatment," he said.

Until Thursday, the official line had been that he was recovering well from an operation to remove a pelvic abscess and would return soon.

Inheriting former Cuban revolutionary leader Fidel Castro's mantle as Washington's main irritant in Latin America, Chavez has become one of the world's most well known leaders during his 12 years in power.

Comparing his health problem to a previous dark moment -- a short-lived 2002 coup attempt -- Chavez promised he would be back in typically grandiose language.

"I want to talk to you about the rising sun, I think that we have emerged," he said.

There were fireworks in the poor west end of Caracas, a bastion of Chavez supporters, and people on the streets shouted "He's alive! He's alive!"

Others reacted with disbelief but vows of solidarity and confidence Chavez will recover.

"He is the best president we have had, a strong man," said Santiago Valledare, a driver watching the speech and saluting the television screen at a Caracas bar.

Chavez's ministers gave a joint appearance minutes after his speech ended, pledging to deepen his wide-reaching socialist reforms even in his absence and saying the government would remain united.

"This is not the time to go backward, it's time to advance," Vice-President Elias Jaua said.

Critics of the stalwart socialist responded to the announcement with a mix of snide glee and optimism about the chances for an opposition leader to take over after nearly a decade of failing to unseat him.

"This will lead to a transition of presidents. It's perfect!" said Freddy Herrera, 25, an accountant. "Because the revolution doesn't work, because socialism is a lie."

His government has canceled a July 5-6 summit coinciding with Venezuela's 200th anniversary of independence. That was a heavy blow for supporters who wanted the charismatic but authoritarian president -- who loves to grandstand at such big events -- back home in time for the national party.

"This development may open a period of unprecedented social and political uncertainty in Venezuela," Goldman Sachs analyst Alberto Ramos said in a note to clients.