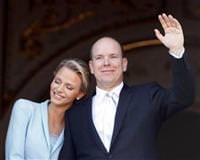 Prince Albert of Monaco married a South African Olympic swimmer in a modest civil ceremony on Friday, a day before a lavish church wedding in the small Mediterranean state.

With a quiet "oui" when asked if she would take the sovereign of the principality as her husband, 33-year-old Charlene Wittstock became Her Serene Highness in the throne room of Monaco's palace.

Giant screens outside the palace broadcast the proceedings to an assembled crowd.

The bride wore an ice blue suit, her blonde hair swept from her face in a chignon, and the long-time bachelor wore a dark suit.

The couple kissed on a palace balcony for the cameras following the ceremony and Albert, 53, thanked the crowd for the warm welcome they had shown his princess.

"Vive le Monaco, thank you and happy celebrating," he told the crowd, his bride at his side.

Residents of the tiny city state on the French Riviera, known as Monegasques, hope the newest princess in the age-old House of Grimaldi will provide a boost to the gambling hotspot and financial enclave.

One of the favorite stomping grounds for the ultra-rich in past decades, with its Monte Carlo Grand Prix car race and sumptuous casino, the locale lost some of its luster with the death of Albert's mother, Princess Grace, in 1982.

Friday's civil ceremony, to be followed by a free open-air concert by French synthpop star Jean-Michel Jarre, was a mere prelude to Saturday, when some 3,500 guests will assemble in the palace courtyard to witness the more formal union.

Monaco officials say they expect some 100,000 well-wishers and the curious to descend on the principality over the weekend.

Media reports that Wittstock was having second thoughts threatened to dampen the festivities earlier this week.

Palace officials denied a report in French weekly L'Express on Tuesday that she had tried to leave from nearby Nice airport on a one-way flight to South Africa, and had required intense convincing by the prince and his entourage to stay.