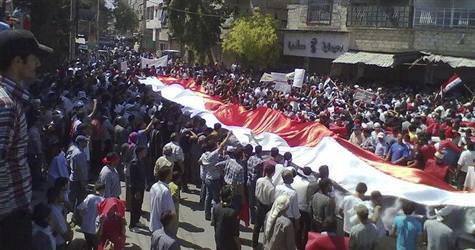 Syrian forces killed 24 civilians on Friday, a prominent rights lawyer said, as tens of thousands of people called on President Bashar al-Assad to step down in some of the biggest demonstrations since a three month uprising.

Defying Assad's military crackdown, demonstrators took to the streets again after Friday prayers across the country, from towns near the western Lebanese border to the desert regions near Iraq in the east.

"Bashar get out of our lives," read placards carried by thousands of Kurds who marched in the northeastern city of Amouda, according to a YouTube video taken by resident.

Encouraged by the widening protests, prominent opposition figures plan to convene a 'national salvation' conference in Damascus on July 16 to reach a broad based blueprint for solving Syria's political crisis.

"In light of the military solution chosen by the regime to end the revolution, the conference aims to reach a consensus guided by the popular protest movement for a transitional period and a national salvation government that lays the foundation for a new constitution and free elections," said a statement by the organisers, which was sent to Reuters.

The statement was signed by 50 figures, including Kurdish leader Mishaal al-Tammo, former judge Haitham al-Maleh, Nawaf al-Bashir, a tribal leader from the eastern province of Deir al-Zor, economist Aref Dalila, a fierce critic of the Assad's family's involvement in business and Walid al-Bunni, a physician who played a major role in a movement for democracy crushed by Assad ten years ago known as Damascus Spring.

With an intensifying security campaign that rights campaigners said resulted in arbitrary arrests of over 1,000 people over the last week alone, organisers said the conference would be far more difficult to convene than a meeting of intellectuals allowed by the authorities last week that gave a rare platform to several opposition figures.

Lawyer Razan Zaitouna told Reuters by phone that the 24 dead included seven protesters in the central city of Homs, scene of widening protests against Assad and 14 villagers in the northwestern province of Idlib, where troops backed by tanks and helicopters have been storming villages to subdue dissent.
The assaults concentrated on the northern section of Jabal al-Zawya region, home to 15,000 people, many of whom are trying to flee to Turkey, which already has 10,000 refugees from attacks in Idlib earlier this month.

"Troops have heavily blocked the roads leading out of Jabal al-Zawya and only tens of people have made it to Turkey. The roads are also dangerous because there is random gunfire from helicopters and tanks," a resident of the region said.

In the city of Hama, video footage appeared to show tens of thousands of protesters massed in a central square. Witnesses and activists said demonstrators in Hama and in Kurdish eastern areas carried red cards, employing a soccer symbol to demand Assad's "sending off."

Authorities have banned most international media from operating in Syria since the outbreak of the protests in March, making it difficult to verify reports from activists and authorities.

State television said gunmen had fired on security forces in Homs in several other towns, wounding two of them.

In the old Homs district of Bab Sbaa, a witness said several armoured vehicles deployed and soldiers fired at protesters from road blocks set up in main streets in the city of one million.

Another activist in Homs said troops surrounded a private hospital in Bab Sbaa and several wounded people rushed to another hospital on the outskirts of the city where security forces were not present.

ASSAD "RUNNING OUT OF TIME"

Protesters have taken to the streets for 14 weeks to protest against Assad in unrest which has claimed the lives of around 1,300 civilians, with security forces arresting over 12,000 people and shooting security personnel who refused to fire on civilians, according to rights groups.
Authorities say 500 police and soldiers have been killed by gunmen they also blame for most of the civilian deaths.

Alongside the military crackdown, Assad has promised a national dialogue on political reforms.

U.S. Secretary of State Hillary Clinton said she was "disheartened" by reports of continued violence near the Syrian border with Turkey. Monday's meeting in Damascus, she said, was not enough on its own to address demands for reform.

"It is absolutely clear that the Syrian government is running out of time," she said during a visit to Lithuania.

"They are either going to allow a serious political process that will include peaceful protests to take place throughout Syria and engage in a productive dialogue with members of the opposition and civil society, or they're going to continue to see increasingly organized resistance."

Around 100 people crossed over into Lebanon early on Friday, witnesses said. Thousands have fled to Lebanon during the three months of unrest, but many have returned and it is unclear how many remain in Lebanon.

Syrian television showed a pro-Assad demonstration of around 100 people in the northern city of Aleppo on Friday, and state media reported several other large gatherings organised by the authorities on Thursday which they said expressed support for Assad's proposed reforms.

The United States and European Union have imposed sanctions on Assad and his top officials in response to the violent repression of the protests.

On Wednesday the U.S. Treasury Department said it was also imposing sanctions against Syria's security forces for human rights abuses and against Iran for supporting them.


The Treasury named the four major branches of Syria's security forces and said any assets they may have subject to U.S. jurisdiction will be frozen and that Americans are barred from any dealings with them.

Damascus and Tehran both deny Western accusations that Iran has supported the crackdown on Syrian protesters.