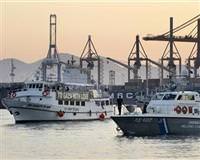 The Quartet of Middle East peace negotiators on Saturday said it is concerned about "unsustainable conditions" facing people in Gaza but said additional flotillas should be discouraged.

For the second year in a row, international activists have been assembling in the Mediterranean on an assortment of boats, planning to challenge Israel's sea blockade of the Gaza Strip.

Israel says its blockade of Gaza is aimed at stopping weapons from reaching the enclave's rulers, Hamas -- an Islamist group branded a terrorist organisation by the West.

Palestinians and their supporters say the naval blockade is illegal and constitutes collective punishment for Gaza's 1.5 million residents.

The Quartet -- the United States, Russia, the European Union and the United Nations -- said in a statement it "remains concerned about the unsustainable conditions facing the civilian population in Gaza but notes that efforts have improved conditions over the last year."

The Quartet, represented by former British prime minister Tony Blair, aims to promote an end to the Israel-Palestine conflict and bring stability to the Middle East, according to its web site.

It said there had been a marked increase in the range and scope of goods and materials moving into Gaza. However, it said "considerably more needs to be done to increase the flow of people and goods to and from Gaza, including a liberalization of the market in aggregate, steel bar and cement."

The Quartet's statement said it recognizes that Israel "has legitimate security concerns that must continue to be safeguarded" and it was committed to working with Israel, Egypt and the international community to prevent the illicit trafficking of arms and ammunition into Gaza.

It urged those wishing to deliver goods to the people of Gaza to do so through "established channels so that their cargo can be inspected and transferred via established land crossings."

The Quartet said it "regrets the injury and deaths caused by the 2010 flotilla" and "urges restraint and calls on all governments concerned to use their influence to discourage additional flotillas, which risk the safety of their participants and carry the potential for escalation."

In May of last year, Israeli marines intercepted a six-ship flotilla in international waters and killed eight Turks and a Turkish-American aboard one vessel, the Mavi Marmara, owned by a Turkish Islamic charity.

Israel said its marines were attacked by activists wielding metal bars, clubs and knives, but organizers of the convoy denied that. The incident led to a breakdown in already strained ties between Turkey and Israel.

The Quartet also called in Saturday's statement for an end to the "deplorable five-year detention of Gilad Shalit".

Israeli soldier Gilad Shalit was grabbed by militants who tunnelled into an Israeli army border position on June 25, 2006 and took him into the Gaza Strip.

Shalit, who holds dual Israeli and French citizenship, was 19 at the time his capture. The last sign of life received from the soldier was a videotape released by his captors in September 2009 showing Shalit pleading for his life.

The Quartet are scheduled to meet on July 11, a senior U.N. diplomat said on Friday. The meeting, expected to take place in Washington, will come amid a U.S. push to revive peace negotiations between Israel and the Palestinians.

A round of secret meetings with U.S. envoys aimed at getting the two parties back around the table has not yet achieved any breakthrough and Palestinian President Mahmoud Abbas recently reaffirmed that he planned to win Palestinians U.N. recognition this coming September.