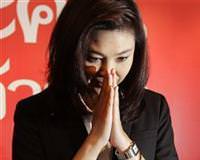 Thailand's powerful military accepted Monday a stunning election victory by the party of fugitive former Prime Minister Thaksin Shinawatra, adding to a new sense of stability in a country plagued by unrest since his ouster in a coup five years ago.

A day after the victory by the Puea Thai Party headed by Thaksin's youngest sister, Yingluck Shinawatra, the military agreed not to intervene or stop her from forming a government, according to the outgoing defence minister.

"I can assure that the military has no desire to stray out of its assigned roles," said General Prawit Wongsuwan, a former army chief close to military leaders involved in the 2006 coup that removed Thaksin

"The army accepts the election results," he told Reuters.

Puea Thai's outright majority of an estimated 264 seats in the 500-seat parliament makes it hard for Thaksin's opponents to stop Yingluck becoming Thailand's first woman prime minister, which might have ignited protests by her red-shirted supporters who clashed with the army in weeks of unrest last year.

Yingluck announced she would form a five-party coalition that would control about 60 percent of parliament, giving her a strong hand to fulfil her election promises.

"Chances of blocking Puea Thai in the near term are severely limited," said Roberto Herrera-Lim, Southeast Asian analyst at political risk consultancy Eurasia Group. "The instability everyone has been worried about now looks less likely. The military will have to be pragmatic now."

The 44-year-old businesswoman plans to roll out a long list of Thaksin-style populist programs that could influence the direction of Southeast Asia's second-largest economy - from subway extensions to big wage increases and various giveaways aimed at boosting spending power, especially in rural areas.

Thai stocks jumped more than 4 percent as the scale of her victory persuaded some investors that Thailand could be more stable after a six-year crisis marked by the occupation of Bangkok's two airports, a blockade of parliament, an assassination attempt and bloody street protests.

Thailand's baht currency rose 1 percent to a one-week high against the dollar on hopes foreign investors would return following $1.4 billion (868 million pounds) of outflows of global capital since election campaigns began in earnest at the start of May.

The vote is a rebuke to the royalist establishment in Bangkok that backed Prime Minister Abhisit Vejjajiva and suggests broad support for policies championed by Thaksin, a populist hero elected prime minister twice, in 2001 and 2005.

Thaksin told reporters he had no desire to be leader again.

"I don't want to be prime minister. I've been with the party too long. I want to retire," he told reporters at his villa in Dubai, where he has been living in self-imposed exile to avoid jail for graft charges he says were politically motivated.

Yingluck has brushed aside concerns about the cost of the promises made during her election campaign, from tablet computers for schoolchildren to a big increase in the minimum wage, which critics say will damage the economy.

"That's not true, we know what to do. We'll reduce costs for people and we know how to generate the income that we'll give back to them," she told Reuters.

The stridently anti-Thaksin Nation newspaper accepted the result but pulled no punches on the challenge ahead.

"The election is over but the hatred remains," it headlined its leader column. "It's time for ordinary Thais to take reconciliation into their own hands."

Abhisit said Monday he had decided to step down as party leader after conceding defeat quickly Sunday.

Just over a year ago, the military put down a protest movement by Thaksin's red shirt supporters in Bangkok and 91 people lost their lives. Nearly 2,000 were injured.

The red shirts accuse the rich, the establishment and army top brass of breaking laws with impunity -- grievances that have simmered since the 2006 coup -- and have clamoured for the return of Thaksin.

Thaksin said Sunday he would "wait for the right moment" to come home. "If my return is going to cause problems, then I will not do it yet. I should be a solution, not a problem," he told reporters in Dubai.