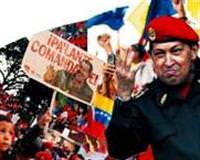 Venezuela's President Hugo Chavez celebrated his nation's 200th anniversary of independence on Tuesday after a triumphant return from cancer surgery in Cuba that has left him weakened but defiant.

"Here I am, in recovery but still recovering," the 56-year-old Chavez said in a speech from his palace in Caracas as ministers and generals led ceremonies outside to mark the bicentennial of the end to Spanish colonial rule.

Chavez's return from Havana has enabled him to reassert political control over the South American OPEC member but it has not dispelled concern that his condition may impede his ability to rule or campaign for a 2012 presidential election.

The socialist leader had a cancerous tumor removed and it is unclear whether malignant cells spread. He needs "strict" medical treatment but has vowed to win his health battle.

After an emotional homecoming speech to supporters on the balcony of his palace late on Monday, Chavez swapped military uniform for presidential regalia to give another short address for Tuesday's celebrations.

"We have recovered our independence," said Chavez, who casts his 12-year presidency as the liberation of Venezuela from decades of rule by corrupt oligarchies.

Critics see it otherwise -- that Chavez's autocracy has cut short Venezuela's proud democratic tradition. In a strong hint he hopes to prolong his leadership, Chavez called on supporters to join him on a "new, long march" towards the bicentennial celebration in 2021 of a famous battle in Venezuelan history.

Any complications of his illness could create political chaos in the oil-exporting nation, where no one has been designated among his allies or adversaries to succeed the charismatic Chavez.

BONDS FALL ON RETURN OF CHAVEZ

Casting himself as the successor of Venezuela's independence hero Simon Bolivar, Chavez has for years been building up to Tuesday's celebration, even naming some nationalized companies "Bicentennial" in its honor.

Street parties were being held across the nation, while tanks and jets headlined a military parade in Caracas.

Prices of Venezuelan bonds fell, after sharp gains last week, as Chavez's return poured some cold water on speculation of a fast change in leadership.

"Probably in the short term people will realize at least he is healthy enough to get back to office. But going forward there will always be doubts and questions regarding his health," said Felipe Hernandez, macro strategist for Latin America at RBS Securities.

Chavez allies, known for internecine disputes and competition for the president's attention, looked relieved and euphoric to see him back. Many in Venezuela had expected he could be in Cuba for weeks or even months.

"You have no idea how much I cried that day," said Denis Leon, 40, a government worker, recalling Chavez's momentous announcement last week that he had been treated for cancer.
"Now all of those (opposition sympathizers) who wished him dead
are the ones crying."

And his vituperative criticism of U.S. foreign policy has made him a hero for many leftists around the world.

But he faces a host of problems that threaten to weaken domestic support including high crime, frequent blackouts, soaring prices and a lack of affordable housing -- issues that made the 2012 election race look tight even before his cancer.

On Monday, Chavez made his first appearance at home in almost a month on his palace balcony, the same spot where he greeted supporters after a botched 2002 coup against him.

Singing, waving a flag and making the Christian sign of the cross, he thrilled the crowd in an example of the showmanship that has made him famous in Latin America and the world.

"He needed to show that he was still in control, to head off infighting among Chavista ranks. He is no doubt seriously ill and major questions loom but his charisma, the basis for much of his support, remains intact."

Chavez's health problems have dented some of the aura of invincibility for a man famous for his nearly superhuman stamina that allowed him to speak for hours on end and make dozens of appearances each month.

Opposition leaders, who have spent more than a decade pillorying his personalized state-centric leadership, have struggled to develop a coherent response to his illness.

They do not want to appear to be reveling in his suffering but desperately need to take advantage of the moment after repeatedly failing to unseat him through mass demonstrations, the failed 2002 coup and a two-month oil industry shutdown.