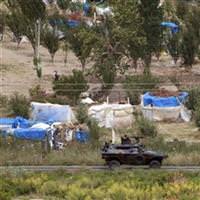 Forces loyal to President Bashar al-Assad shot dead 14 people on Tuesday in the Syrian city of Hama, activists said, and France called on the United Nations to adopt a firm stance in the face of "ferocious armed repression."

Tanks were still surrounding Hama, days after it witnessed some of the biggest protests against Assad's rule since a 14-week uprising erupted in March.

The attacks focused on two districts north of the Orontes River, which splits the city of 650,000 people in half. Residents said the dead included two brothers, Baha and Khaled al-Nahar, who were killed at a roundabout.

Troops raided towns to the northwest of Hama near the border with Turkey in Idlib province, and authorities intensified a campaign of arrests that has resulted in the detention of at least 500 people across Syria in the last few days, rights campaigners said.

In the eastern provincial capital of Deir al-Zor, security forces arrested Ahmad Tuma, a former political prisoner and secretary general of the Damascus Declaration, a grouping of opposition figures founded in 2005 to unify efforts to transform the country into a democracy.

"Heavily armed 'amn' (security police) came to Dr Tuma's clinic and dragged him away in front of his patients," one of Tuma's friends told Reuters by phone.

Some residents of Hama, scene of a crackdown by Assad's father nearly 30 years ago, had sought to halt any military advance by blocking roads between neighborhoods with garbage containers, burning tires, wood and metal.

Tuesday's raid by security forces and gunmen loyal to Assad followed the killings of at least three people when troops and security police entered Hama at dawn on Monday.

French Foreign Ministry spokesman Romain Nadal said the world could not stand by "inactive and powerless" in the face of the violence.

"We are hoping that the Security Council adopt a clear and firm position and we call on all the members of the Security Council to take responsibility in light of this dramatic situation with a Syrian population subjected day after day to an unacceptable, ferocious and implacable armed repression."

French MP Gerard Bapt, head of the French-Syrian Friendship Committee, told Reuters: "With the Arab League not moving and with a nation like Saudi Arabia saying nothing publicly to condemn the killings by the Syrian regime it is difficult to see international pressure rising beyond the economic."

France, unlike its European partners and the United States, says Assad has lost legitimacy to rule. But a French campaign for U.N. condemnation of the crackdown has met stiff Russian and Chinese resistance.

France's foreign minister Alain Juppe, who held talks in Moscow last week, said on Tuesday there were signs Russia was beginning to question its Syrian stance. He said he attempted to sway his Russian counterpart, Sergei Lavrov, but that Russia was still threatening to use a veto against the resolution.

German Ambassador Peter Wittig, U.N. Security Council president for the month of July, said at the United Nations on Tuesday that discussions continued about the Council possibly issuing a resolution on Syria.

"Discussions on a draft resolution that is on the table -- presented by the European Council members including mine -- will continue," said Wittig. "We don't know yet the result but there will be continued discussions on that initiative."

Wittig said he was hoping for support from other countries in the coming "days and weeks" for the resolution.

The U.N. is also expected to start discussing on July 14 the recent decision by the International Atomic Energy Agency board of governors to report Syria's covert nuclear activities to the Security Council for possible punitive action.

Asked why there has been no international intervention in Syria like there was in Libya, British Foreign Secretary William Hague said a request from the Arab League to impose a no-fly zone on Libya was a major factor behind action there.

"Assad may wait to see whether large-scale protests in Hama continue. He knows that using military aggression against peaceful demonstrations in a symbolic place like Hama would lose him support even from Russia and China," Syrian activist Mohammad Abdallah told Reuters from exile in Washington.

Abdallah said using tanks to attack Hama would "totally discredit" a promise made by Assad to seek dialogue with his opponents. Troops and armor were attacking villages and towns in the Jabal-al-Zawya region, north of Hama, which had been the scene of large protests against Assad's 11-year rule, he said.

Assad's father, Hafez al-Assad, who ruled Syria for 30 years until his death in 2000, sent troops into Hama in 1982 to crush an Islamist-led uprising in the city where the Fighting Vanguard, the armed wing of the Muslim Brotherhood, made its last stand.

That attack killed many thousands, possibly up to 30,000, and one slogan shouted by Hama protesters in recent weeks was "Damn your soul, Hafez."

Authorities have prevented most independent media from operating in Syria, making it difficult to verify accounts from activists and authorities.

Rights groups say Syrian security forces have shot and killed at least 1,300 civilians across the country since the protests started and arrested over 12,000.

Several troops and police officers have been killed for refusing to fire at civilians.

Authorities say 500 police and soldiers have been killed by gunmen, who they blame for most civilian deaths.

Assad has promised a national dialogue with the opposition to discuss political reform in Syria, which has been under the iron rule of the Baath Party for nearly 50 years. Many opposition figures reject dialogue while the killings and arrests continue.