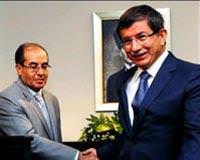 Turkey pledged on Wednesday to help the beleaguered Libyan people through the upcoming Muslim fasting month of Ramadan, by setting up tents for the breaking of fast and funneling aid through the rebel administration.

In the past month, Muslim Turkey has openly asserted its support for the Libyan opposition demanding an end to Muammar Gaddafi's 41-year-rule.
Speaking at a joint news conference in Ankara with Mahmoud Jebril, the executive head of the Libyan opposition National Transitional Council, Turkish Foreign Minister Ahmet Davutoğlu said Turkey would work even more closely with the council.
"Honestly, Turkish people cannot be at ease when they are breaking their fast if their Libyan brothers are not. They don't have food to break fast, but we do, so they should have it too," Davutoğlu said. Ramadan is due to begin in August.
Davutoğlu said Turkish municipalities would twin themselves with Libyan towns and cities to provide support.
Turkey, a Muslim member of NATO, is supporting the Western alliance's operations in Libya in a non-combat role, with efforts focused on keeping open channels for relief supplies to the embattled civilians.
Gaddafi's forces, under pressure from a NATO air assault, have recently lost some ground to rebel fighters, and his government has been cut off from financing by U.N. sanctions.
There has been a flurry of reports that Gaddafi could be seeking a deal to step aside, despite denials.
In an interview with Reuters in Tripoli on Wednesday, Libyan Deputy Foreign Minister Khaled Kaim said a solution to the conflict could be found before the start of Ramadan.
His comments dovetailed with hopes expressed by Davutoğlu a day earlier that the framework of a political solution could be found before Ramadan to help bring an end to the civil war.
Turkey will host a Libya contact group meeting in Istanbul on July 15 that will bring together foreign ministers from Western and Arab governments with leaders of the Libyan opposition as part of an international effort to bring stability to a post-Gaddafi Libya.
Jebril said the discussions in Ankara had focused on the immediate need for money to ease people's suffering.
"We need income, and we need to spend to secure a normal life for our people," he told the news conference.
During a visit to the rebel city of Benghazi on Sunday, Davutoğlu promised $200 million in aid in addition to $100 million already provided for humanitarian work.
When fighting first broke out in Libya in late February, Ankara's first task was to evacuate more than 20,000 citizens working there, while Turkish firms fretted over billions of dollars potentially lost in unfinished construction and infrastructure projects.
But Jebril said these companies should return.
"We called today all Turkish companies who used to do business in Turkey to come back and restart work," he said.
Aside from Libya's oil and gas wealth, Davutoğlu noted there were large sums in frozen assets that would eventually be released to allow a new government to pay its way.
Turkey had appeared out of step with Western allies in the early days of the conflict, arguing against unilateral air strikes on Gaddafi's forces, as it was trying to persuade the Libyan leader to go peacefully.
A rising power in the Middle East and North Africa with close economic ties with Gaddafi's Libya, Turkey has made clear its support for the spread of democracy and has called on leaders in the region, notably next door in Syria, to deliver the changes their people want.