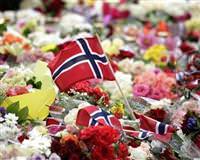 Before Friday's deadly attacks by a Norwegian on a self-styled mission to save European "Christendom" from Islam, it was not uncommon to see Prime Minister Jens Stoltenberg taking public transport to work and senior ministers walking in Oslo without bodyguards.

Such openness could now be at an end after Anders Behring Breivik's devastating car bomb attack on the prime minister's offices and the slaying of young activists from the ruling Labour party trapped on an island.

The attacks, in which at least 93 people were killed, will also affect Norway's debate on immigration but are unlikely to close the shutters of one of Europe's most open societies.

"We will have a society based on less trust ... we will be a bit more anxious than before," said Thomas Hylland Eriksen, a social anthropologist from the University of Oslo.

Stoltenberg said on Sunday that Norway would "keep going" but that there would be a definite break between the country before and after the attacks.

"But I am quite sure that you will also recognize Norway afterwards -- it will be an open Norway, a democratic Norway and a Norway where we take care of each other," Stoltenberg said.

Breivik, who admitted to the shooting spree and bomb blast, has said through his lawyer that his actions aimed to "change Norwegian society" which he saw as being undermined by multi-culturalism.

Analysts say the scale and brutality of the attacks shattered Norway's self-image as a peaceful nation focused on mediation efforts across the globe and the Nobel Peace Prize.

"The lesson here is that fanatics do and will continue to exist -- and that Norway is not immune," said political science professor Janne Haaland Matlary.

"In terms of cruelty and evil, this compares to Beslan -- and that is the most chilling fact for Norwegians," she said, referring to the 2004 school massacre in southern Russia by Chechen militants in which nearly 200 children were killed.

In a low-crime country where a single murder is front-page news, the shock from the scale of the violence would drown out any message on immigration Breivik was seeking to make, said Matlary. Even politicians who usually espouse anti-immigrant views, will above all seek to distance themselves from Breivik.

"This will surely tone down the debate on immigration ahead of local administration elections in September," said Frank Aarebrot, political scientist at Bergen University. "In the traditional way, politicians will self-censor themselves."

The biggest massacre on Norwegian soil since World War Two also prompted soul-searching among Norwegians, who initially feared the attacks may have been the work of Islamic militants.

"It's a double shock," Marit Saxeide, 68, who runs a small shop in an immigrant district of Oslo. "Ninety-nine percent of Norwegians immediately believed this was a Muslim terror attack. When it turned out not to be, that was the second shock."

The number of immigrants in Norway nearly tripled between 1995 and 2010 to almost half a million out of an overall population of 4.8 million.

The number of asylum-seekers hit record highs at the end of the previous decade, fuelling concern among a section of the electorate unhappy about an influx of immigrants they felt were drawn by Norway's generous welfare handouts and high living standards.

As a result, the Labour government moved to toughen some of Europe's most liberal immigration policies, under pressure from the populist Progress Party whose anti-immigration platform struck a chord and won it the support of one in five Norwegians.

Breivik was once a Progress Party member but later left, complaining it was not radical enough.

A U.S. diplomatic cable from 2009, posted on Wikileaks, criticised Norway's limited ability to track potential Islamic militants on its turf and Friday's attacks suggest that its security apparatus had also failed to detect home-grown threats.

"Surely government monitoring will be improved, although it is likely to be done indirectly, via closed circuit television, Internet and social media rather than more officers on the streets," said one security analyst, who asked not to be named.

Ervin Kohn, a leader of Norway's small Jewish community, said the shocking attacks may change "Norwegian naivety, especially about the need for security." He hoped the incident would help change what he saw as a chronic lack of will by Norwegian courts to hand down tough sentences on radicals for fear of infringing their rights.

The incident could also fuel debate about access to high-power weapons in a country where hunting is widely regarded as part of Norwegians' heritage.

In documents published shortly before his rampage, Breivik said he bought his automatic rifle after telling authorities he needed it for "hunting deer." He also bought a telescopic scope and a silencer by mail order.