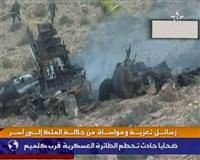 At least 78 people were killed on Tuesday when a Moroccan military transport plane crashed into a mountain in the south of the country during bad weather, the military said in a statement carried by the state news agency.

The military said there were three injured survivors so far from the crash, which happened when a Hercules C-130 aircraft was trying to land in Guelmim, having flown north from the disputed Western Sahara territory.

The crash is Morocco's worst known air disaster since 1973, when 105 people were killed after a Royal Air Maroc aircraft crashed near the capital Rabat.

The military said 60 soldiers, 12 civilians and nine crew members were on board at the time of the crash.

The three survivors and 42 bodies recovered so far have been taken to the nearby military hospital, the military said.

In a letter addressed to relatives of the victims, King Mohammed -- who heads the army -- said he was "deeply moved by this painful accident," according to MAP news agency.

The plane had been traveling from the Western Saharan city of Dakhla and was due to travel on to Kenitra, 40 km (25 miles) north of the capital, Rabat.

Morocco keeps the majority of its soldiers in Western Sahara, a territory that Rabat annexed in 1975.

The country's most recent plane crash was in 1994 when all 44 passengers and crew members aboard a Royal Air Maroc aircraft died in a crash near the southwestern city of Agadir.

A government committee later said the Agadir crash was deliberately caused by the pilot.