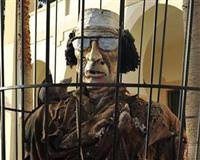 Pressure increased on Libyan leader Muammar Gaddafi on Wednesday as the rebels opposing him won diplomatic recognition from Britain and their leadership withdrew an offer for him to stay in Libya if he gave up power.

Britain, one of the main foreign players in the campaign to oust Gaddafi, also expelled his diplomats from London and invited the rebel National Transitional Council to replace them.

Gaddafi, facing charges of crimes against humanity at the International Criminal Court, has scoffed at the efforts to end his 41-year-rule and has weathered a now-stalled rebel advance and NATO air raids on his forces and military infrastructure.

France and Britain earlier this week dropped their insistence that he leave the country as part of any settlement, a softening of position that indicated a growing anxiety to end a conflict that has now lasted five months.

"The coalition has one aim. It is asking Gaddafi to leave power and not to participate in negotiations," French Defence Minister Gerard Longuet told reporters after a meeting with his Italian counterpart Ignazio La Russa in Rome.

"As far as the rest of it goes, it's a matter for the Libyans and the International Criminal Court."

Earlier, rebel leader Mustafa Abdel Jalil said the NTC had offered a month ago to allow Gaddafi to stay in Libya provided he step down first but that this offer had now expired.

"This offer is no longer valid," Abdel Jalil told reporters in the rebel-held eastern city of Benghazi.

The proposal was made about a month ago through U.N. envoy Abdel Elah al-Khatib with a two-week deadline attached, he said. More than two weeks had passed.

"This decision reflects the National Transitional Council's increasing legitimacy, competence and success in reaching out to Libyans across the country," Hague said in London.

It also invited the opposition to replace diplomats of Gaddafi's government, who have been expelled from London.

The United States and about 30 other nations have also recognised the opposition, potentially freeing up billions of dollars in frozen funds. Russia has criticised such moves, accusing nations of taking sides in a civil war.

The rebels have long called on foreign governments to give them access to Libyan assets frozen abroad so they can cover the daily costs of running the east of the country, which they now control.

They won $1.1 billion at a donor conference in June and received a further boost this week when Turkey dispatched the first cargo of fuel in a multi-million dollar supply deal.

But their fighters remain poorly armed and often disorganised. Despite four months of NATO air strikes on pro-Gaddafi forces, the rebels have failed to make big gains towards Tripoli and appear unlikely to make a breakthrough before the start in early August of the Muslim holy month of Ramadan.

"JUSTICE MUST BE DONE"
Nor has the flurry of diplomatic activity in recent weeks yielded results. U.N. envoy Khatib visited both sides this week but made no progress.

There had also been speculation that talk of allowing Gaddafi to remain in Libya might pave the way for the International Criminal Court to reconsider the charges levelled against him, his son and intelligence chief.

But the ICC said "justice must be done" irrespective of any political agreement.

"A political agreement does not affect the legal obligations or the judicial process. Justice must be done, in accordance with the rules of the Rome Statute (the ICC's founding treaty)," el-Abdallah said.

The United Nations said late on Tuesday that the two sides remained far apart on finding a political solution, a verdict underlined by Gaddafi's camp calling for an end to air strikes before any talks can begin.